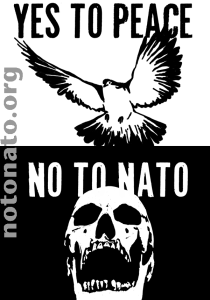 “Wednesday morning an event was held in a building overlooking Freedom Plaza in Washington, D.C., at an organization called the Center for European Policy Analysis, which is funded by: FireEye, Lockheed Martin, Raytheon, Bell Helicopters, BAE systems, the U.S. State Department, the Pentagon, National Endowment for Democracy, the U.S. Mission to NATO, and NATO’s own Public Diplomacy Division.

Participating in the event were several foreign ministers from NATO nations, ambassadors to NATO, and U.S. Senator Chris Murphy. NATO is designed to vigilantly protect you from numerous imaginary and NATO-provoked dangers, but its events are apparently protected by magic spells, as I just walked in and took a seat.

When I couldn’t take any more of the pro-militarism talk, I stood up and interrupted, holding up a sign reading: “Yes to Peace / NoToNATO.org.