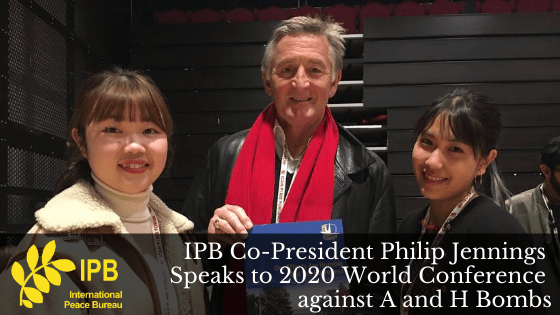 On Nagasaki Day 2020, the 75th anniversary of the USA dropping an atomic bomb on the city, IPB Co-President Philip Jennings gave the following speech to the attendees of the 2020 World Conference against A and H Bombs:

It is an honour for me to bring greetings of global solidarity to the people of Nagasaki on behalf of the International Peace Bureau – the IPB.

We are Nobel peace prize winners.

Since 1945 we have raised our international voices against nuclear weapons.

We send our love and solidarity to the people of Nagasaki.

We thank the hibakusha for their tireless efforts over generations to warn the world, to convince the world to turn its back on nuclear weapons.

The IPB has a duty to continue your work. We promise to do so.

To awaken new generations to the threats to all humankind that these weapons bring.

For the world to find a new human centered path to peace, through dialogue, justice and democracy.

I have a strong bond of friendship with Nagasaki.

On my first visit I went to Nishizaka Hill to visit the shrine of the 26 martyrs and discovered that one of them was my namesake Philip. I was immersed in your history, discovered you were Japan’s gateway to the world.

Today you bring a message to the world, a call to action for peace.

I made a pledge to Nagasaki that I would be a global ambassador to convey the message for world free nuclear weapons.

I was happy to become a Nagasaki Bugyo even if the role today is different from that in history.

I have met with the hibakusha, the Nagasaki Kwassui Senior High School, the history teacher Mr. Toshiro Kusano that began a project that from a petition became the young peace messengers taking their message to the world.

In 2010 as General Secretary of the world’s largest global trade union we brought over 2000 trade unionists representing 150 nations for the UNI Global Union Congress to Nagasaki.

All of those international delegates visiting here for the first time.

We took over the City.

Occupied all the hotels.

Had our own decorated tramcar.

We marched and held a rally for peace.

The delegates breathed your air, learned your history and pledged that they too would campaign for a world free of nuclear weapons.

Millions upon millions of workers have heard your call and now agitate and campaign for a world free of weapons of mass destruction.

The pandemic has kept me from you today but I will return.

The theme of this session is the global campaign against nuclear weapons.

Today the IPB with its 300 member organisations is a leading light in this campaign.

We do not give up. We are a global force.

The IPB is building our presence in Asia.

We need a stronger peace movement here in Asia.

Economic and military power is shifting to Asia.

It requires a strong peace movement, a strong labour movement.

The citizens voice for peace must be heard. An Asia which thrives for its people and not just through its military might.

We want peace between North and South Korea, India and Pakistan.

An end to war games in the South China Sea.

All Asia must be a nuclear weapon free zone.

-we are against war.

-we campaign for disarmament.

-we are opposed to nuclear weapons.

We expose the wasteful billions spent on military around the world.

Our campaign message against military spending this year was, invest in healthcare, not warfare.

To disinvest from nuclear weapons.

The IPB stands against the dictators, the authoritarian regimes, the fascists, the racists, the haters, the warmongers.

We question the military industry complex, the manipulation of our parliaments by defense industry lobbying and manipulation.

For arms control and limits to the arms trade where democratic governments export their arms to despots to crush their people.

We say another world is possible.

The global coronavirus pandemic shows how our priorities are all wrong. How ill-prepared we were.

How we ignored the warnings.

We have fault lines everywhere.

The world has 14,000 nuclear weapons and we don’t have enough basic medical equipment to deal with the victims of Covid-19.

The world invests in and prepares for nuclear Armageddon and yet we cannot meet the most basic human needs of health, shelter, food, school.  In the U.K. my home country we invest millions in new weapons whilst millions of children grow hungry.

The pandemic has created 300 million new jobless, where 1.6 billion informal workers have no income, where 4 billion people have no social protection, where human rights are attacked, and economic inequality grows with each passing day.

A climate crisis with a suffocating planet.

A people and planet crisis of climate and nuclear weapon existential threats has pushed the doomsday clock to 100 seconds to midnight. I remember the Cuban missile crisis in 1963 as a school kid we were told we would receive a 240 second warning of a missile attack.

That seeking shelter under a table would save us.

For our entire civilization, the second hand has never been closer to midnight, and as ICAN and the Red Cross and the hibakusha have told us there is nothing that can protect the people from the bomb.

The fault lines are present in the nuclear weapon world.

A collapse in weapon control treaties.

New scenarios to consider their use in war.

We are on the threshold of the deployment of a new generation of weapons and means of delivery in Europe. The IPB is working with civil society in Europe to organize and mobilise public opinion against this.

The hibakusha can help us to inform and convince the leaders and people of Europe to reject these weapons.

The application of AI to nuclear weapon decision making increasing the risk of mistakes and miscalculation.

All of these steps take us closer to disaster from which people cannot be saved.

From the pandemic to superpower nuclear rivalry we have to pull back from the brink and to call for a global reset of policy – it is time for us to build the world anew.

We send a rallying cry to the world and its citizens to not accept the world as it is to fight to change our politics, our economies and our societies for people and planet.

The call is to build back better.

For a new social contract.

For a new economy not driven just by the profit motive. For a reorientation of the world of business to all stakeholders not just shareholders.

A digital revolution which is human centered.

For a green new deal.

A world of true gender equality.

A world free of discrimination.

The world has agreed a roadmap with the Sustainable Development Goals. We are behind schedule. There are funding gaps. Global disarmament can bridge the funding divide.

But the discussion is missing an essential component.

In building the world anew. We need a peace pillar. A pillar that realizes the treaty to prohibit nuclear weapons, that reduces military expenditure, that removes the scourge of war, that finds a new dialogue for global peace.

The new generation have taken to the streets to fight the climate crisis, to express their outrage at racial discrimination now we need the same energy for peace.

To organize and mobilise for peace.

Thank you for this opportunity.

We send a message of love, respect and peace to the hibakusha and to the people of Nagasaki.

St Philip and the martyrs are remembered 400 years later. Your tragedy will never be forgotten.

Souls have been lost in Hiroshima and Nagasaki and yet we in the peace movement promise that with our beating hearts we say never again.

A few weeks ago, I was invited to the International School in Geneva to talk about peace.

It was an art class. I spoke about the hibakusha and Nagasaki.

They were entering an art competition and they decided all 100 of them to produce one common piece of work on the theme of peace.

They decided that they would produce a mural with a difference. They painted a mushroom cloud and within the cloud they painted 100 portraits of people who had dedicated their life to campaigning for peace.

One student said with our voices together we are more powerful than any bomb.

They were saying they are citizens of Nagasaki.

Like those children we at the IPB are from Nagasaki too.

We thank the hibakusha.

We take your message to the world of no more Nagasaki. No more Hiroshima.