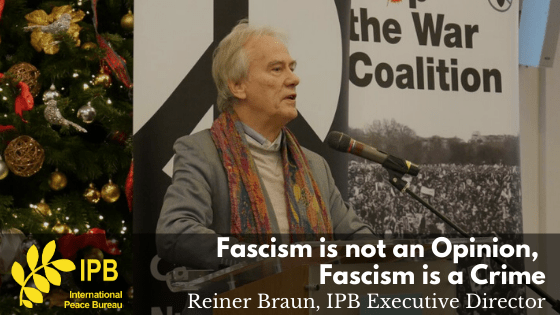 Reiner Braun is Executive Director of the International Peace Bureau, a Peace Nobel Price winner as organization, and one of the main speakers of the peace movement in German. He lead the German chapter of The International Association of Lawyers against Nuclear Arms (IALANA), the Vereinigung Deutscher Wissenschaftler (VDW) — the German Pugwash group, Scientists for Peace and Sustainability and the International Network of Engineers and Scientists for Global Responsibility (INES). In 1982 he begun working in the office of the “Krefelder Appeal” against new nuclear weapons in Europe. Reiner Braun is a speaker on the subjects of NATO, militarization of Europe, military spending, responsibility of scientists. He is author of several books, including “Einstein and Peace” and a biography of the Peace Nobel Laureate Joseph Rotblat. He studied German Literature, History and Journalism.

Fascism is not an opinion — fascism is a crime

In a time of growing right-wing and fascist threats in many countries around the world — as well as the increasing threat of war, which makes a large nuclear confrontation appear quite possible — the world celebrates the 75th anniversary of the liberation from fascism.

A day of victory for all people who believe in peace, democracy, justice and dignity.

A day of heartfelt gratitude to the countries and political forces that made this possible — the Allies and especially the Soviet Union.

27 million Soviet citizens — officers, soldiers, civilians, women, men, the elderly, and children — gave their lives for the liberation of Europe from the scourge of fascism, the most murderous and criminal system in the history of mankind.

Fascism left behind a landscape of scorched earth. The material losses were enormous, the human destruction and suffering almost inconceivable.

As a German citizen, I must emphasize again and again with sadness and shame that Germany was not able to free itself from the fascist criminals; far too many sympathized with fascism until the end or at least were neutral or even open-minded towards it. The fascist ideology had been hammered deep into the brains of the majority of the population, and the heroic courage of the (few) resistance fighters in Germany, whose strength and courage all generations should deeply respect, were confronted by the ideological and political steamroller of fascism.

But fascism did not fall from the sky in Germany either; it was brought to power financially and politically — by the old elites of big industry, big landowners and the deeply reactionary and large bourgeoisie in Germany. That is why we should never forget the comments of Max Horkheimer: “Whoever talks about fascism cannot keep silent about capitalism.”

The oath of the survivors of the Buchenwald concentration camp: “Never again — fascism — never again war!”, is therefore also and especially an expression of gratitude to the Red Army for the liberation not only of Germany, but all of Europe from fascism.

It is therefore downright disgusting when the European Parliament passes a resolution that blames fascism and communism for World War II.

It is more than historical blindness; it is an unbelievable attempt to turn murdered people into murderers and murderers into freedom fighters

The historical truth remains: the liberation of Europe by the Allies, especially by the Soviet Union, was the precondition for the development of the European continent into a continent of peace, democracy and prosperity.

Without the liberation of Europe from fascism, especially by the Red Army, there would be no UN Charter, no decades of — albeit cold — peace, no policy of détente through the Helsinki process, and millions of people from such a diverse range of countries would not have met in friendship and partnership.

It is hard to imagine what a barbaric darkness Europe would have sunken into had it not been for this liberation of Europe, which is associated with so much suffering, death and destruction.

Unfortunately, gratitude is not a political expression, but rather a deeply human one; I am deeply and forever grateful to the citizens of Russia and all the republics of the former Soviet Union as well as to the resistance fighters of all countries.

Until today — 75 years after the liberation and 35 years after the speech of the then-Federal President Richard von Weizsäcker — the acceptance of the phrase “liberation from fascism” is still politically controversial in Germany.

Peace in Europe is threatened 75 years onward, and not by the liberators like present-day Russia.

The ink was not yet dry under the policy of détente; the Peace, Cooperation and Disarmament Charter of Paris November 1990, when the US and NATO began their “march east”, the eastward expansion of NATO. For the US arms industry, this was big business. For Europe, NATO’s eastward expansion was the beginning of a new era of confrontation, which led to an ice age when neutral Ukraine was to be integrated into the Western military alliance after western support for the coup and its consequences. Russia was to be definitely encircled and banished from Central Europe. Brzhezinski sends his regards.

This development, and not the integration of the Crimea into Russia — however it might be assessed — is the basis of the confrontation. The responsibility for this lies with the US and NATO. The dramatic arms buildup of NATO — and in particular the US — has further exacerbated this situation.

It is a sort of historical irony to allege that a country which is outnumbered by NATO 16 to 1 in military expenditure, and thus in militarisation, should attack it and be particularly aggressive; quite the opposite is true.

Ideologically, this march eastwards was accompanied by a revival and intensification of some primitive fear or hatred of Russia.

The image of the enemy — having never completely disappeared — was intensively revived for Western global politics; achievements of a cooperative policy were carelessly abandoned.

As a peace movement, we have always said NO to this; for us, what Willy Brandt has emphasized again and again remains true: peace in Europe is impossible without Russia.

An indispensable component of this aggressive NATO foreign policy was the undemocratic and neoliberal internal policy in the west. This leads almost inevitably to the strengthening of radical right-wing and fascist figures and parties — especially given the relative weakness of the left and a completely neoliberal policy of social democracy.

The AfD’s alleged “friendship with Russia” is dishonest as long as it strives for a revival of the Bundeswehr parallel to the growth of the former fascist Reichswehr and sees it as a model.

The AfD denies all of the crimes of the Reichswehr against the Soviet population. They equate the Reichswehr with glory and honour. There can be no friendship on the basis of crime and murder.

The AfD supports warmongering and wants to anchor it ideologically in the minds of the German population by reviving Prussian and fascist militarism. They believe that racism and hatred of minorities and refugees should guide the thoughts and actions of the citizens.

No to this over and over again — the AfD stands in the unspeakable tradition that led to fascism!

What we need is cooperation and disarmament; despite the coronavirus, we need people to be shaking hands — politically speaking. War must finally be banished in the 21st century. To work towards this is especially necessary and indispensable on May 8 and 9, 2020.

Reiner Braun joined a call for a culture of peace on the 75th anniversary, which can be seen here.