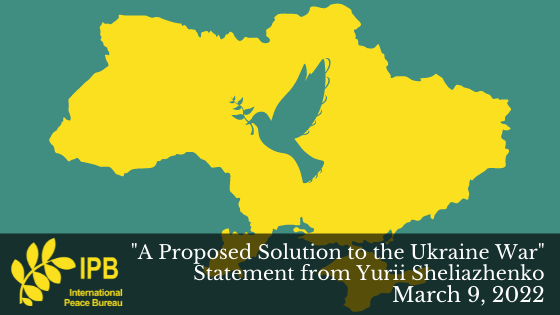 Russia should step back and stop the war against Ukraine. NATO should step back from conflict around Ukraine escalated by its support to war effort and aspirations of membership of the Ukrainian government. All military alliances like NATO and CSTO should be dissolved or transformed into alliances of disarmament instead of military alliances. All great powers should join the Treaty on the Prohibition of Nuclear Weapons. All great powers should commit to nonviolent global governance based on peace culture, universal communication and cooperation instead of doomed to fail efforts to impose their hegemony, global or regional, by brutal military force.

Ukraine should not side with any bellicose great power, our country should be neutral. We need to demilitarize, abolish conscription, settle peacefully territorial disputes concerning Crimea and Donbass and contribute to the development of future nonviolent global governance instead of trying to build a 20th century fashioned nation state armed to the teeth. It will be easier to negotiate with Russia and her client separatists when you share a vision that Ukraine, Donbass and Crimea in future will be one whole on the united planet without armies and borders. Imagine a future when the United States and Ukraine, Russia and China and other people and lands will be united in the Federation of Earth. Even if elites lack intellectual courage to look into the future, pragmatic understanding of benefits of the common market should pave the way for peace.

This is how Putin and Biden could resolve their great power dispute, by creating even greater power together, not just for personal or national gain, but for the common good of a whole humankind.

And, as I said, it is also a solution for the Ukraine-Russia conflict. The rest issues raised in this conflict are nuances which should be resolved fairly in the paradigm of nonviolent global governance.

That’s why I propose global civil society to create an independent public commission of experts on the peaceful resolution of the Ukraine crisis.