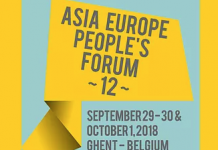 An important declaration was adopted on the 1st of October, following the 12th ASEM-summit in Ghent, Belgium, hosted during the 29th of September and 1st of October.

The Asia Europe People’s Forum (AEPF) has been holding the biennial People’s Forum since 1996 when it began as a parallel initiative to the first ASEM Summit held in Bangkok. It was established as a platform and Forum to amplify people’s voices on the need to respect and fulfil social, economic and human rights for all across Asia and Europe, and to highlight the importance of developing just, equal and inclusive approaches to regional integrations.

AEPF´s objectives are to understand and learn from struggles and resistance over the past two decades in Asia and Europe that have confronted and challenged neoliberalism, corporate-led globalization and global capitalism in its various phases.

IPB would like to highlight their work and present a tremendously important chapter of their declaration, which is called “Peace and Security – People’s Vision and Recommendations for change“.

“At the 2016 Asia-Europe People Forum (AEPF) in Ulaanbaatar, peace movements and people’s organisations made a variety of recommendations to deal with issues such as nuclear weapons, refugee crises, violent conflicts, inter and intrastate disputes and tensions, military spending, social inequalities, terrorism, state and non state violent actions and submitted these to ASEM leaders in an effort to maintain sustainable peace and people’s security in Asia and Europe and the world as a whole.

Since then, peace and social movements within the AEPF framework have worked with others to significantly contribute to maintaining peace and security in Asia and Europe and the world. As a result, we have witnessed some positive changes: the adoption of the binding treaty to ban nuclear weapons in 2017 and the recent progress in the settlement of the conflicts in the Korean Peninsula; peace negotiations in several armed conflicts; and the women’s movements’ mobilisation and passing Security Council Resolution 1325.

However, the peace and security situation remains complicated. Opposition of nuclear-power states to the Treaty on the Prohibition of Nuclear Weapons, the USA’s withdrawal from the Iran nuclear deal increases greatly the tensions in West Asia where there the many ongoing violent conflicts, destruction and breakdown. Militarist values and defence budgets continue to increase in many countries, even while the most compelling needs are for social expenditure and saving the environment. Besides, conflicts and disputes in ‘hot spots’ including South China Sea and East China Sea, boundary and unresolved conflicts in South Asia, the plague of terrorism, extremist politicised religious fundamentalism, forced displacement of ethnic minorities and the severe refugee crises continues to evolve in complex and dangerous ways that negatively impact people, communities and states. Destructive economic policies without including environmental considerations, resulting in climate change, evident by such ecological catastrophes in the Mekong Delta, floods in Japan, France and heat wave in Europe which threaten people’s lives and livelihoods. In addition, populism, xenophobia and the rise of the far right wing are leading to multiple threats, insecurities and violent conflicts in the world in general and in Asia and Europe in particular.

Neo-liberal globalisation has led to an extraordinary concentration of finance capital and political power with deep inequalities and exclusions.

Our Key Recommendations and Demands for Change to ASEM Parliamentarians AEPF would like to reiterate and submit proposals to ASEM leaders to maintain sustainable peace and people’s security in both continents and the world as a whole:

1. Immediately sign, ratify and implement the Treaty on the Prohibition of Nuclear Weapons; encourage discussion of the possibility of establishing Northeast Asia Nuclear Weapon Free Zone as one of the options of addressing the issue of denuclearisation of the Korean peninsula and contributing to regional confidence and stability;

3. Put an end to armed conflicts and initiate negotiations in major hot spots like West Asia; encourage peaceful resolution of disputes in the South China Sea in accordance with international law, notably the UN Charter and UNCLOS;

4. Encourage the Korean peace process and support people’s movements and diplomatic efforts, so parties stay on the negotiating table till real de-militarisation is achieved and people are united again;

5. Stop threats and use of force in international relations. Stop military interventions and sanctions since it harms the vulnerable, poorest and the excluded but has little impact on regimes and leaders that are targeted;

6. Strengthen international institutions and reforms towards democracy and accountability;

7. Support the promotion of education for peace and human rights, develop peace advocacy based on nonviolence, human rights and secularism;

8. Stop all destructive policies, respect international and regional agreements, and strengthen cooperation in the protection of the environment for human security;

10. Be responsible for necessary assistance to war victims, including Hibakusha, victims of Agent Orange and chemical barrel bombs in their daily lives and their struggles for justice;

11. Address the refugee crises based on humanitarian and human rights’ principles and assist countries and populations through strategic partnering, association agreements, civil society/ people-to-people dialogue and direct aid. To sensitise different sections of society including political parties, organisations and institutions to the problems faced by refugees and migrants and the common responsibilities to address this issue.”