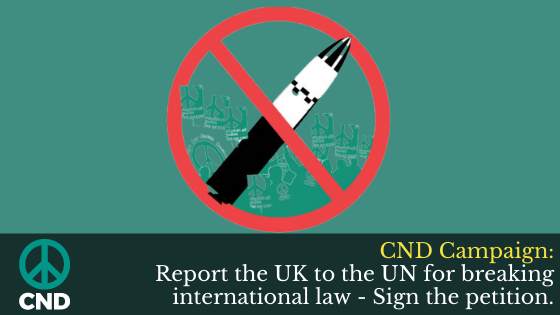 CND is reporting the UK government to the United Nations for breaking international law.

he UK government has announced it will increase the number of nuclear warheads in its arsenal for the first time since the Cold War. A legal opinion commissioned by CND has confirmed this is a breach of international law.

As a signatory to the UN’s nuclear Non-Proliferation Treaty (NPT), the UK has committed to working towards disarmament. Instead, it is going the other way and getting more nuclear weapons, and during a pandemic no less!

CND is reporting the UK to the President-designate of the upcoming NPT Review Conference – a significant international summit to monitor progress, or lack thereof, of the treaty.

If you want to take action, join the initiative and sign here.