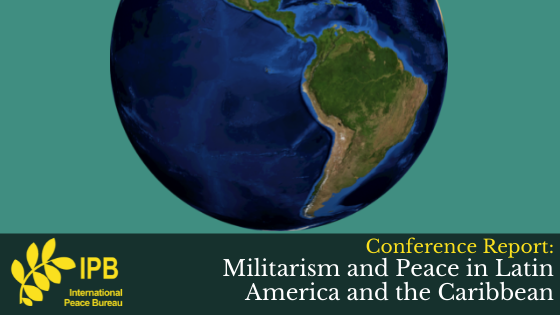 More than 100 participants showed the growing interest in the problem of the increasing militarization in this region.

The explosive nature of this issue is made clear by two opposing developments: (1) The heads of state and government of the Community of Latin American and Caribbean States (CELAC) declared their region a “zone of peace” at the II Summit in Havana in January 2014. And (2) it is no coincidence that at a time when the progressive movements in the region have been pushed back by reactionary forces and the US empire, the militarization of the region is increasing at an extreme rate with direct NATO involvement.

The meeting of NATO defense ministers in Brussels on Oct. 21-22, 2021, has once again underlined the role of NATO as the global military alliance. Latin America and the Caribbean play an important role. Latin America has been a crucial part of NATO since the 2014 summit in Wales and part of the U.S. policy since 2009 has led to the inclusion of Latin America in the global trend of militarization and rearmament. This is illustrated by the countless military maneuvers and the expansions of military bases in the region.

The numerous lectures and discussions on the first day focused on historical aspects and the current situation in the country and subcontinent, while the second day of the conference focused on acute challenges, prospective challenges, perspectives and possibilities for left-wing action in the region. Thus, a broad spectrum was discussed: NATO’s partnership agreements with Colombia and Brazil as “global partners”; expansion of US military bases in Peru, Colombia, Honduras, Costa Rica, Chile, Paraguay, and Guantanamo in Cuba; additional military bases of Great Britain, France, and the Netherlands, as well as new military bases in Colombia, Guyana, and the ABC islands; the increase in military maneuvers by U.S. and NATO forces in Colombia, Brazil, and off the coasts of Venezuela; CIA-funded mercenary attacks in Venezuela; training of military personnel in U.S. and other NATO countries; significant growth in arms exports to the region; the increasing subordination of civilian tasks to military leadership (i.e. the war on drugs, opposition and emancipatory movements and Corona policy etc.); and sanctions and blockade policies against Venezuela, Cuba and Nicaragua.

The unilateral sanctions and blockade policy, especially of the USA, was the subject of a working group (“Sanctions and Blockades as Warlike Interventionism”), in which the great extent of those measures and their effects in the numerous countries, including those on other continents, was discussed in detail. The six decade-long U.S. blockade of Cuba was roundly condemned by the conference in a special resolution. However, more information, education and media work is needed, and above all political pressure. In addition, legal steps should be examined and implemented, such as the application of the EU’s anti-blocking statute or legal actions at the European-level and at the International Court of Justice.

In the introductory contribution by Leo Gabriel, these developments were convincingly clarified and Raina Zimmering used the example of Mexico, especially with reference to the internal militarization of the country. The contribution from the Cuban political scientist Santiago Espinosa Bejerano, from the Center for International Political Research, dealt with the struggle against the hegemonic plans of the U.S. in the Latin American region. What was perhaps most surprising was his exposition of the influence of the United Kingdom in the south of the coastal areas and Antarctica, which are of strategic importance. Heike Hänsel, until recently a member of the German parliament, in the faction of Die LINKE, pointed out the destructive role of NATO and the EU in the subcontinent and the double standards they practice. She particularly emphasized the destruction of the peace process by the reactionary government of Colombia with the tacit acquiescence of the EU.

The multifaceted working groups served to deepen the discussion and develop proposals for further activities, which fed into the Sunday debates. Thus, Julieta Daza reported on the attempts to disrupt the implementation of the peace treaty in Colombia and the dangerous actions of paramilitary groups directed against neighboring Venezuela, but also about the widespread popular protests against the policies of the Duque government.

Ruth Kries, a Chilean physician, spoke about the potential of the Constituent Assembly now in session and the process leading up to its formation. Jimmy Chediak, Consul General of Venezuela
in Frankfurt/Main vividly described the effects of the US sanctions, which are contrary to international law, on everyday life, especially on the health care system, and how the Venezuelan population is resisting them. A highlight of the congress was certainly the contribution, followed by a discussion, of the executive secretary of the leftist networking process Foro Sao Paulo, who was connected via zoom. The Brazilian
Monica Valente explained the diversity of the societies, the differences and the importance of stronger communication and cooperation.

In his opening speech on Sunday, Reiner Braun emphasized the positive role of Latin America in the many peace processes, especially in the creation of a nuclear weapons-free zone. This is counteracted by the increasing active role of the world’s strongest military alliance, NATO, in the region, destabilizing progressive governments and underpinning a course of global confrontation.

In the concluding roundtable discussion, action orientations and options for peace and liberation were again were discussed. Özlem Demirel, MEP of The LEFT, the Austrian intellectual Leo Gabriel, the peace activist Kristine Karch from No to NATO & EcoMujer e.V., and Julieta Daza from Juventud Rebelde Colombia and Venezuela each spoke from different perspectives respectively. Moderator Natalie Benelli of the Association Switzerland-Cuba (VSC), underlined that CELAC, Foro Sao Paulo and similar associations and networks are of utmost importance for a peaceful and progressive development of the subcontinent. For this to happen, however, the left-wing forces in the NATO countries would also have to become stronger and more effective. Protests at the next NATO summit are just as necessary as a stronger networking of the solidarity and peace movements.

In all the very constructive and objective discussions, the interpreters had to work very hard and the technical challenges of this international conference were also considerable, leading only to minor breakdowns. In the concluding statement of the conference it says: “We see a close connection between mass protests by the population, a progressive political turnaround and independent and peaceful politics. Our solidarity and support goes to this policy of peace, common security and disarmament. Therefore we decidedly say No to EU-militarization and the aggressive policy of the EU and the EU Parliament against Cuba and Venezuela.
Solidarity is the basis of political successes of the peace and solidarity movements and as well as of the left forces in Latin America and in Europe – it is our political and moral com-pass!”