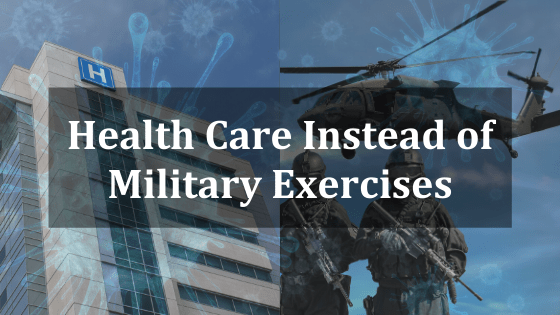 With the recent WHO declaration of COVID-19 as a pandemic, concerns are higher than ever about the rapid global spread of the disease with precautions being taken to limit travel, large gatherings, and panic. Nonetheless, one of the largest military drills in Europe since the Cold War is still set to unfold in the coming months, Defender 2020 Europe. The exercises planned to bring together 37,000 soldiers and 7,000 national guardsmen from NATO countries for exercises across Europe to simulate a wartime scenario.

Criticism of the drills are plentiful: putting a stress on European transportation systems, which will prioritize military relocation over civilians and risks damaging roads and the surrounding environment, as well as contributing to climate change; raising the alarm and directing threats toward Russia in the East, including drills near their border in the Baltic countries; and the further militarization of Europe, which takes resources away from social programs to fund forces that make the continent more dangerous, rather than safer.

Recently, however, one concern has risen above the rest: the spread of Covid-19. Similar military exercises have already been cancelled: the remainder of the “Exercise Cold Response 20” in the Arctic Circle was cancelled this week by the Norwegian Joint Headquarters, as has the remainder of the “Exercise Juniper Cobra 20” between the US and Israel (the second such exercises between the two states to be cancelled).

As of March 12, the US has decided to “reduce” its participation in Defender 2020 due to COVID-19, admitting that the virus has already forced the Army Europe commander, Lt. Gen. Christopher Cavoli to self-quarantine after possibly being infected. Nonetheless, the scale of this reduction remains unknown and the primary focus remains on their “highest priority training objectives.” Meanwhile, Poland’s Chief of General Staff has tested positive for COVID-19 following his return from an army gathering in Germany.

It is clear that these military exercises go against the advice of national and international health institutions as well as governments themselves. The large gatherings of military forces not only risks spreading the disease between soldiers, but also the larger population of Europe, given that the soldiers will not be completely isolated from the rest of the population. There is nothing about Defender 2020 that distinguishes it from similar military drills that have already been cancelled – in fact, the larger scale of the drills and involvement of a greater number of countries only risks increased exposure and cases of transmission across Europe.

Similarly, the resources committed to the Defender 2020 drills could be much more effectively used to combat the actual threat to Europe – the spread of the pandemic. Imagine if governments could commit the money they would have spent to run ineffective drills to strengthening their health systems, providing testing equipment, investing in research to fight the virus, and ensure health institutions have the necessary equipment to treat those already infected.

If the case against Defender 2020 wasn’t already strong enough, the COVID-19 virus should be the final nail in the coffin. It is time to cancel the exercises and look for alternative, more effective strategies to maintain peace in Europe.