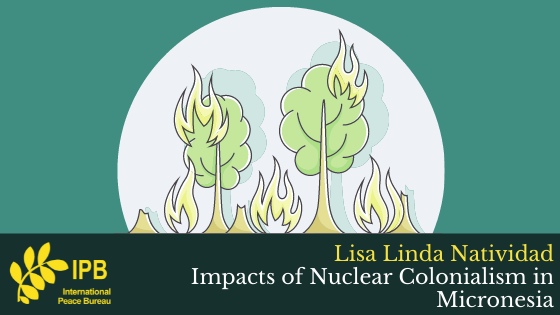 Empowered by the Treaty on the Prohibition of Nuclear Weapons (TPNW), we celebrate the victory of this work to make the world a safer place and embrace our global humanity. We on Guahan stand in solidarity as we vision and create a peaceful world with genuine security, where people not only have the basic necessities to survive, but everything we need to thrive on this planet. We strive for the protection of our environment, the use of diplomacy for global tensions, and the value of human life so that nuclear weapons will no longer be part of the vocabulary of our children.  We stand in solidarity with nuclear survivors, who have suffered from the destruction of nuclear weapons and support their call for a safe and peaceful world.  We will continue in our work holding states accountable to the TPNW.

Our communities in Micronesia struggle with environmental contamination and health problems, as well as the loss of our ancestral lands for the development of military bases.  We live with the loss of self-determination to make decisions about our communities because the political structures do not take into account our concerns and input about the dangers of living near military bases. We have little access to our traditional fishing grounds and medicines that are behind military fences.

Guahan (Guam) is a territory of the United States located in the Mariana Island chain of Micronesia in the Pacific Ocean.  Across Micronesia, the Marshall Islands was the location of nuclear testing in the 1950’s.  In the historical period of the Cold War, the United States was involved in the nuclear arms race with the USSR. Nuclear testing entailed the removal of whole islands of people to neighboring locations while the islands of Enewetak, Bikini, Rongelap, and Utrik were bombed to ascertain the destructive force of bombs, as in the case of the H-bomb.  Severe physical ailments resulted amongst the Marshallese population, which has resulted in the United States including a provision in the Republic of Marshall Islands Compact of Free Association, Section 177, stating, “The government of the United States accepts responsibility for compensation owing… for loss or damage to property and person of the citizens of the Marshall Islands… resulting from the nuclear testing program…”

An inquiry into the matter as it relates specifically to Guahan resulted in the development of the Blue Ribbon Panel Committee Report on Radioactive Contamination in Guam between 1946 and 1958.  In the report, Santos and Forbes stated:

What was perpetrated against this region was the largest ecological disaster in human history.  This disaster was no less than the detonation of over 108,000 kilotons of nuclear explosive directly up jet stream of Guam.  The amount of contamination was 42 times the approximately 150 million curies released as a result of the testing in the United States of America.  The AEC (Atomic Energy Commission) ejected between 6.3 billion and 17 billion and other surrounding regions with various radioactive contamination over a twelve year period, this inundated the region and other surrounding regions with various radioactive isotopes such as Cerium-140, Iodinne-131, Xenon-131, Strontium-90, Yittrium-90, Cesium-137, Barium-137, Potassium-40, Argon-40, Magnesium-24, Hydrogen-3, and Helium-3, all of these products of nuclear tests with a half-life of from four days to thirty years, enough time to reach Guam according to the data provided by and collected in this report.

The findings of the Blue Ribbon Panel Committee Action Report was further confirmed by testimony from Charles Bert Schreiber in 2001, a retired United States Naval lieutenant stationed on Guahan in 1952 in the capacity of Atomic, Biological, and Chemical Warfare Defense Officer.  He was primarily responsible for maintaining Geiger counters, which detected and measured alpha particles, beta particles, and gamma rays, which are all know to cause cellular damage to the human body by ionization of radiation.  He further shared that readings on his Geiger counter on about November 3, 1952 were extremely elevated with very large amounts of radiation.  He shared reporting his findings to his superiors to be told, “that I was to ignore the radioactivity and keep my mouth shut PERIOD.  I started to protest, but he told me to leave. I then knew something was very, very wrong.  The ‘cover up’ had started.”

Schreiber further reported that the radiation levels in the ecological elements of the island were contaminated.  He shared that the rainwater contained high levels, which was the primary source of drinking water for the people of the island. These findings are significant in that rainwater goes on to water the plants, which were consumed by natives.  Likewise, ocean water was also contaminated and fish, which was a staple in the indigenous diet, was also exposed to radiation.  Earlier this year, Lt. Charles Bert Schreiber returned to the island as the keynote speaker of a prayer vigil in memory of Pacific Islander victims of atomic bomb testing.  In an apology to the people of Guahan, he was quoted as saying, “You were not informed of simple precautions that should’ve been taken, resulting in formidable pain and suffering that was intentionally imposed on you.”

US military declassified documents confirmed high levels of radiation (strontium, in particular) recorded on the island in the 1950s.  Robert Celestial, President of the Pacific Association of Radiation Survivors (PARS), reported that this millennium is the age of the half-life of such isotopes and the incidences of cancer and other diseases are at greatest risk today.  As a result of exposure to nuclear testing fallout, residents of Guahan and others throughout Micronesia are at higher risk for cancer and other diseases.  Cancers of the lung, thyroid, breast, esophagus, stomach, and pharynx are examples of the types of cancer that are related to radiation exposure as determined in empirical studies.

We are reminded that peace and justice is central in light of the ongoing issue of nuclear colonialism in Micronesia.  Particular emphasis is made on keeping our lands safe and sustainable for our children and generations to come.  We are all deeply committed to ensuring the survival of our people in the midst of nuclear colonization. We are very concerned about the safety of our communities and look forward to the realization of global peace free of nuclear weapons and all things nuclear in Micronesia and the whole world!