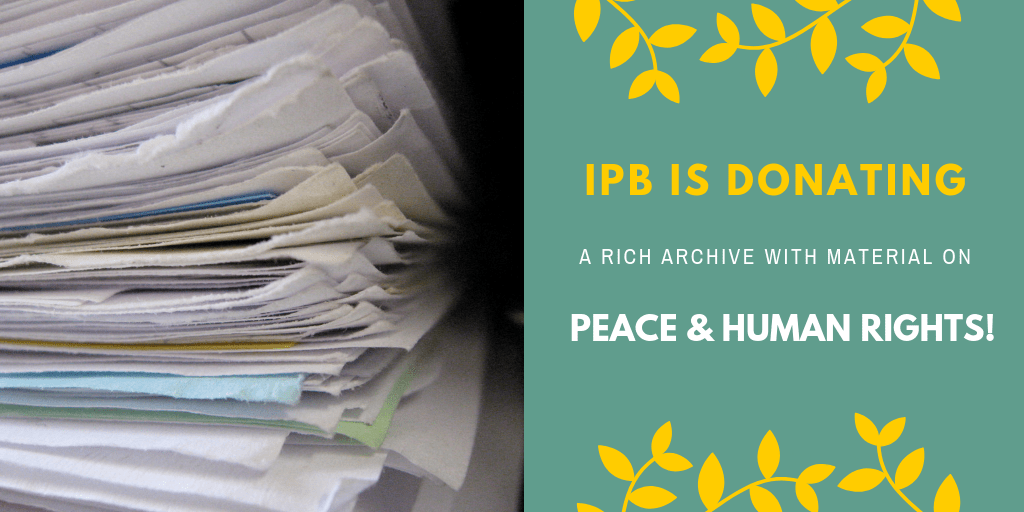 I am the recently-retired Secretary-General of the International Peace Bureau, IPB, currently living in Leeds, UK. I occupied the position for 27 years, beginning in 1990, working at the headquarters in Geneva. I am now tasked with finding a suitable home for a substantial collection of archives relating mostly to that period.

The IPB is the oldest of the international NGO peace federations, with a long-standing presence in Geneva (since 1924). It was founded in Berne in 1891 and was awarded the Nobel Peace Prize in 1910. Over the years 13 of the IPB’s leaders also received the Prize – a unique total. The organisation has worked on a multiplicity of peace-related themes.

The collection consists of around 350 box-files. It is currently stored in Geneva, but could be housed anywhere in the world.

The content features material about and from a wide range of conflict zones on all continents, as well as human rights documentation. There are thematic files as well as geographical ones, with a variety of types of literature. There are also runs of around 40 periodicals. IPB’s core organisational documentation and programme areas are already housed elsewhere. The material in this particular collection would suit an institution whose centers of interest include conflicts, human rights, and/or the role of NGOs worldwide.

“You have a rich archive for scientific research on human rights at the end of the 20th century through the organization of the International Peace Bureau.” -Paule Hochuli Dubuis, Assistante conservatrice, Bibliothèque de Genève

We are willing to offer this material (preferably as a whole) as a donation to a suitable institution. However we have no budget for archival work. IPB runs a fairly large global network (300+ member organisations in 70 countries) but has only a handful of staff and very limited income. Although the headquarters recently moved to Berlin, we retain an office space in Geneva.

I look forward to responses, and of course would be happy to answer any questions. I can be reached at colinarcher@phonecoop.coop