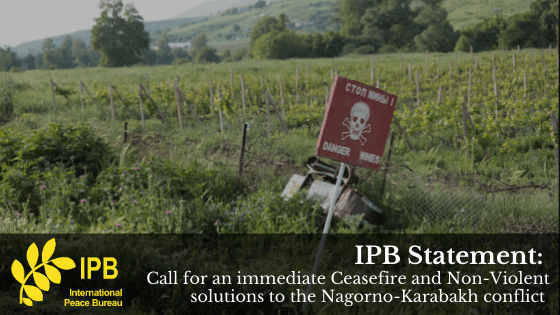 At the time of writing, more than 100 lives have been lost since fighting began in Nagorno-Karabakh, on the 27th of September.  In the spirit of the International Day of Non-Violence, the 2nd of October, the IPB calls for an immediate end to the violence and for a non-violent resolution to the conflict.

This could be facilitated by a renewed push by the OSCE peace talks, which began in 1994, but quickly stalled. Such processes and avenues for non-violent solutions to the conflict need to be pursued with more vigour and commitment than they have been before, lest they suffer the same fate as in 1994. The UN Secretary-General António Guterres has repeatedly called for a global ceasefire in these times of global crisis.  The need for which is only highlighted by the re-emergence of this conflict.

The conflict between Armenia and Azerbaijan has flared up with regular intervals for almost 30 years. The current return to conflict comes with the largest some of the most intense and deadly battles in years, it is also likely to last far longer than past flare-ups. This fear is stoked by leaders from both sides using violence inciting rhetoric and brazenly preparing for prolonged and open warfare. An immediate end to the violence is important not just to prevent the needless loss of life, but also to prevent a wider regional conflict that would draw in Turkey and Russia.

Armenian and Azerbaijani officials are both rejecting the very idea of having talks, adding to the fears of all-out war. This only adds to the importance of the call for a Global Ceasefire, renewed OSCE or UN negotiations, and non-violent solutions to the conflict. We cannot have temporary solutions that will simply delay the next loss of life. We need decisive action on the side of the international community, as well as national leaders in Armenia and Azerbaijan.

Today is the International Day of Non-Violence; let us take this opportunity to support the call for a Global Ceasefire, and an immediate end to the violence in Nagorno-Karabakh and the surrounding areas. Violence is never a solution; sustainable peace will always require non-violent means!