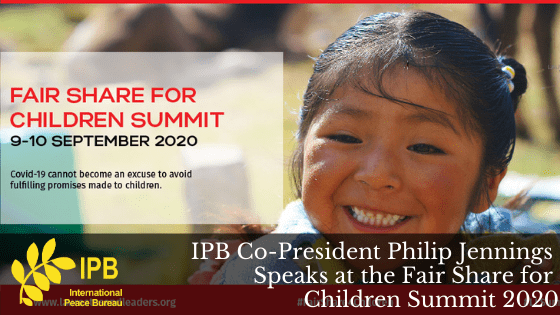 On 10 September 2020, IPB Co-President Philip Jennings spoke at the Fair Share for Children Summit 2020, hosted by the Laureates & Leaders for Children. Philip’s speech, in full below, focused on the increased vulnerability of children on the move – particularly in the context of war  and the Covid-19 crisis – reinforcing the call for a global ceasefire and a redirection of spending from the military to caring for the most vulnerable children.

The International Peace Bureau is a Nobel Laureate and the world`s oldest peace NGO.

During our 130-year history we have condemned the tragic costs of war on children.

The UN Secretary General was correct when he said `the only war we should be waging is the war against Covid 19.

Today there 198 armed conflicts, 15 full scale and 23 limited wars in the world.

One in ten of all children live in countries ravaged by war. Its why they are on the move.

In 1944 my mother was bombed. The bomb fell beside her. It did not explode.

From Yemen to Syria to the Sahel and elsewhere children have not had my mother’s good fortune as children, families, homes, schools, hospitals are bombed with catastrophic loss of life and public services destroyed.

These are crimes against humanity. They should be punished as such.

Covid 19 compounds the violent challenges facing children on the move – its violence that comes in many forms.

The political violence of the xenophobes, racists, pass the buck governments that say you don’t belong that forces children underground into travel and living conditions which put them at high risk of infection.

85% of refugees live in developing nations that often lack the infrastructure from clean water to doctors.

The criminal violence of the human traffickers and people smugglers.

Left adrift and dying at sea.

Economic violence as millions of families suffer job and income loss and children forced to work.

Gender violence as women and girls vulnerable to abuse.

The violence of neglect as lockdowns produces millions of internally displaced children who are on the move and left without support.

The violence of climate change which brings violent conflict.

The world has agreed we must act in the best interests of children.

The Covid 19 response shows that we are not. 0.13% of all relief funds for the vulnerable is proof enough.

John Lewis the recently deceased American civil rights activist said we have to do something, when justice is absent – to make Good Trouble.

We call on the laureates and leaders to make good trouble for children on the move.

Good trouble to back the Secretary General’s call for a global cease fire and disarmament.

Good trouble to rid the world of nuclear weapons.

Good trouble to reduce the 1.9 trillion dollars spent on arms. The 0.13% for the vulnerable is just 0.53% of military spending.

Good trouble that no child is forced to become a soldier.

Angry trouble to prevent children being detained and split from their families.

Make 2021 a good trouble year to eliminate child labour for business to rid their supply chains of child labour.

Good trouble to re-imagine the world and build a new social contract for people and planet.

Adults today were children on the move yesterday.

Covid 19 has shown us that these adults and their children have been on the front lines to care for us all.

They sacrificed their health for us, they have died for us.

They and their children dreamers deserve not just our gratitude but our support to push governments to recognize their right to become fellow citizens.

Let’s transform the Covid 19 crisis into a peace dividend for all and particularly for children on the move.

Read the declaration, signed by the IPB here.