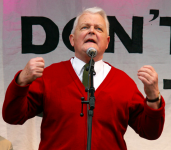 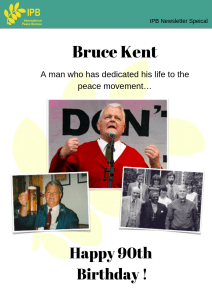 Bruce Kent – A Hero for Peace

It is widely known that Bruce Kent is a Peace Super-hero. It cannot be coincidental that his name is a combination of Bruce Wayne (Batman) and Clark Kent (Superman) and his main super-powers are his sense of justice and love of people. If you have seen Bruce speak you will know that he has a gift for it – he can pare an issue down to its fundamental ethical questions in a way that is understandable and often tinged with humour and accompanied by one of his many stories. If you have met him you will know that he has an ability to make you feel like an old friend, even if you have never met before.

Bruce became a Chaplin to Pax Christi UK in London 1958 and joined the Campaign for Nuclear Disarmament (CND) in 1960. In 1967 he launched a major correspondence in The Times about the morality of nuclear deterrence. This produced a wide debate – especially within the Churches. When he took over as IPB President from Sean McBride in 1985 he had already been the General Secretary of CND for 6 years, CND Chair from 1977-1979 and Chair of War on Want from 1974-1976. 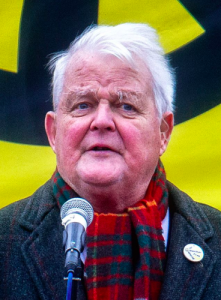 This was during the height of the Cold War which was accompanied then by a rapid growth in the peace movement – CND national membership grew from 2,000 to 100,000 and the number of active local groups increased from around 30 to nearly 1000. This expansion was certainly helped by Bruce’s convincing appearances in the media. Bruce was also one of the founders and main organizers of the European Nuclear Disarmament Campaign in the 1980s. The number of nuclear weapons reached their peak in 1986 and Bruce remained IPB President until 1992, becoming chair of CND again from 1987-1990 and undertaking in 1988 a 1000-mile peace walk from Warsaw to NATO HQ in Brussels to call for a united peaceful nuclear-free Europe.

Bruce is still amazingly active, taking up a range of local and global peace and justice issues. He and Valerie, his wife, are active in their local church and Bruce is still a Vice President of CND, Pax Christi and the Movement for the Abolition of War. He is a well-loved neighbour, a respected writer and campaigner. It is always a pleasure to be greeted by his enthusiastic welcome or to hear him speak at rallies and meetings. If you walk along the street with him or accompany him on a bus journey, there is always someone who recognises him and wants to shake his hand One of the stories he likes to tell is when someone approaches him and remembers seeing him on TV or in the newspapers and in their excitement they say “didn’t you used to be Bruce Kent?” Well, he did and still is. 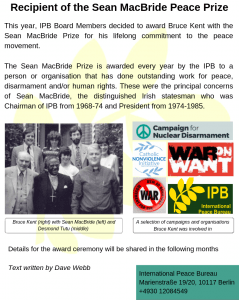 The newsletter can by downloaded using this link: Download