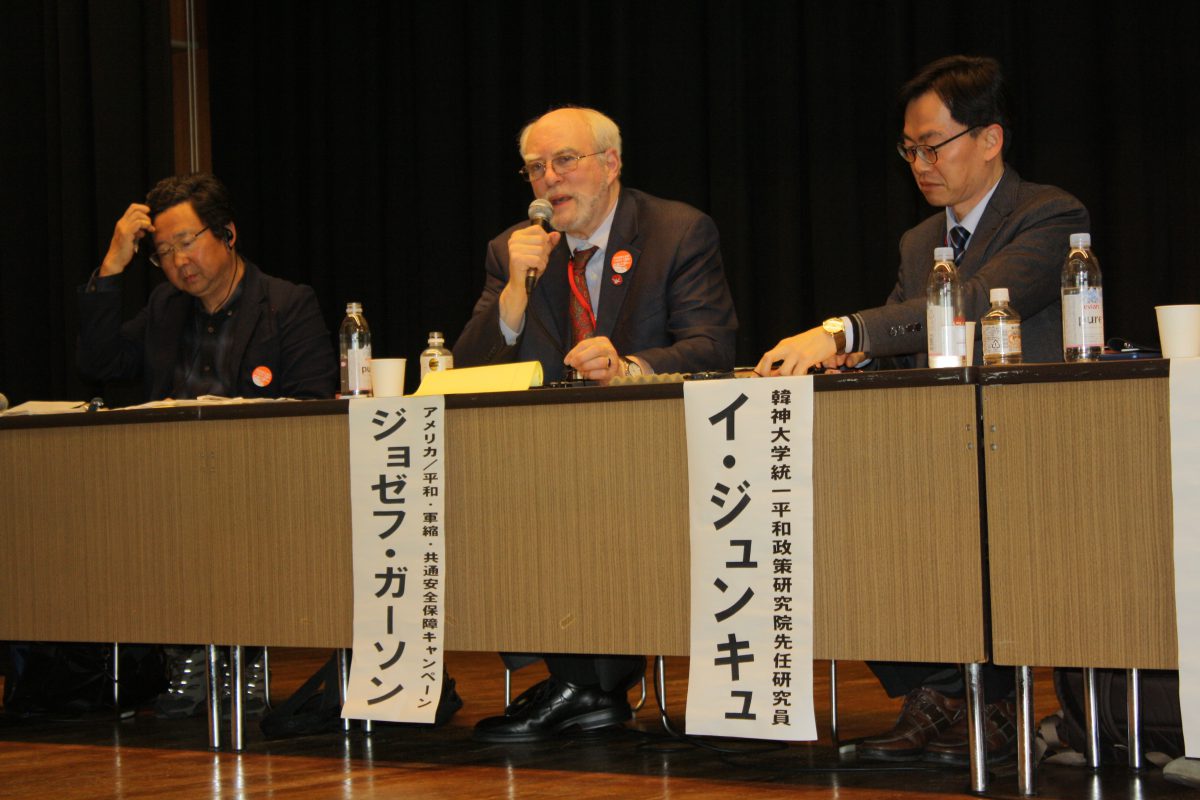 IPB’s Vice-President, Joseph Gerson, spoke at the Gensuikyo International Forum, part of the 2019 Bikini Day Commemorative Program in Japan. The event marked the 57th anniversary of the Bikini disaster caused by a U.S. hydrogen bomb test in the year of 1954.

Below is the transcript of Joseph’s talk at the event, with the theme “After the Post-Cold War Era: Abolition and the Imperative of Preventing Nuclear War”.

“It is a privilege to rejoin the Bikini Day commemoration. Like the genocide perpetrated against the North American native peoples, centuries of American slavery and Jim Crow apartheid, and imperial wars across the Global South, the people of Rongelap and elsewhere in the Marshall Islands were sacrificed on the altars of racism and nuclearism. Dehumanized in U.S. popular imagination, they were sacrificed in the pursuit of privilege and power.

But atrocities committed outside fortress walls cannot be contained there. A recent study reports that up to 1967 between 340,000 and 690,000 U.S. people were also killed as a result of radioactive fallout.[i]

That said, we celebrate the intellectual and moral jujitsu, of Marshallese and Japanese people who transformed their nuclear traumas into the most powerful force for the elimination of omnicidal nuclear weapons.

As you know, even as the Trump Administration’s National Security Statement calls for preparations for a three-front “Long War” against China and Russia[ii] and pursues the chimera of 21st century full spectrum dominance, the U.S. is facing its most profound political crisis since the years leading to our Civil War. Multiple corruptions of our electoral systems, Trump’s recent unconstitutional emergency declaration to circumvent Congress, racism, assaults on truth, the press, the rule of law and science, and staggering income inequality are accelerating U.S. decline. But, sectors of our constitutional system and democratic culture remain resilient, and the Trump tyranny will end in 2020, if not before.

However, we are sobered the militarization of our society and broad Congressional support for staggering levels of military spending. In its futile effort to maintain global hegemony, the U.S. is upgrading its entire nuclear arsenal and delivery systems and preparing for full spectrum wars against Russia and China: on land, sea, space cyber space, punctuated by increasingly dangerous military confrontations with its great power competitors.

The U.S. crisis comes at a critical time. We are in unchartered territory. The 75 years of unrivaled U.S. military, economic and diplomatic dominance are over. The interregnum between the dying order and the new one struggling to be born is a period of uncertainty and increased existential dangers – including nuclear war. But it also presents us with the imperative and opportunity to bend history’s arc toward greater peace and justice.

Before Trump came to power, the post-Cold War era was on its deathbed. China had risen, becoming a “peer competitor.” Putin stabilized Russia’s economic freefall and revitalized the Kremlin’s military. Cyber and other asymmetric economic and military capabilities have undermined U.S. strategic advantages. And the Bush-Cheney invasion of Iraq destabilized the Greater Middle East, ending U.S. hegemony in that oil-rich region.

Richard Hass, the Republican former head of Policy Planning at the State Department, advises that we are not in a new Cold War. Rather, he points to similarities to the period leading up to World War I: eras of tensions between rising and declining powers, complex alliance structures, intense nationalism, territorial disputes, arms races with new technologies, economic integration and competition, and wild card actors.

Trump’s trade wars, his abrogation and violations of international nuclear and climate treaties, his embrace of authoritarian autocrats, his humiliation of U.S. allies and the month-long shutdown of U.S. governmental operations have reinforced this dynamic.

The Bulletin of the Atomic Scientists just repeated its alarm that nuclear dangers and climate change have brought humanity two minutes to midnight. They decried the dangerous lack of coherent U.S. foreign and military policies, pointed to Trump’s Nuclear Posture Review that reaffirmed the U.S. first-strike doctrine, urged the building and deployment of more usable nuclear weapons, committed to massive spending to upgrade the U.S. nuclear arsenal and its delivery systems, and the added circumstances that could trigger the U.S. launching a nuclear war. They also cited the increased reliance on nuclear weapons by all the nuclear powers, the return to Cold War rhetoric, and the absence of U.S.-Russian arms control negotiations.

Trump, Bolton and Pompeo have since withdrawn the U.S. from the INF Treaty, an action driven as much by U.S. efforts to contain China’s rise, as by concerns about Russia. Russia and the U.S. were both apparently in violation of the Treaty, but the way forward was for the U.S. to accept Russian invitations to renewed arms control negotiations. With the earlier U.S. withdrawal from the ABM Treaty, Trump’s violation of the nuclear deal with Iran to advance regime change campaign against Teheran, and now the dispatching of the INF Treaty, Russia’s Foreign minister Sergey Lavrov has it right: “A new era has begun… [with the U.S.] destroying the entire arms control system. [It appears] that the Strategic Arms Reduction Treaty [New START], which expires in 2021, will come next.”[iii]

While Trump wields his diplomatic wrecking ball, boasts that “we have more money than anybody else by far”, and calls for a new arms race, Washington tragically is not the only source of nuclearism’s dangers. Within hours of the INF Treaty’s collapse, the U.S., Russia and France almost simultaneously conducted missile “tests.” Vladimir Putin has joined Trump in nuclear madness, saying that he is ready for a Cuban Missile style crisis, the moment when humanity came closes to nuclear extinction. Russia is replacing its triad, threatens to match any new U.S. missile deployments in Europe and is coordinating its nuclear policies with China. China is reinforcing its second-strike capabilities by increasing its arsenal, MIRVing missiles, and developing new delivery systems. Britain, France and Israel are all upgrading their arsenals. India and Pakistan remain locked into their own nuclear arms race, with India’s strategic arsenal also designed for nuclear warfighting against China.[iv] And, even as the Trump-Kim diplomacy has provided a way for Trump to retreat from his disastrous fire and fury threats and opened the way for improving North and South Korean relations, the DPRK is positioned to remain a nuclear power for years to come.

Yet, as we know from the Hibakusha testimonies that were central to the negotiation of the Nuclear Weapons Prohibition Treaty that will come into force next year, popular pressure from below can transform our world. Such forces are again alive across the world,working to restrain the forces of annihilation and to finally eliminate the world’s nuclear arsenals.

In the U.S., in response to popular demands, Senator Elizabeth Warren, who along with Bernie Sanders is the most dynamic progressive now competing for the Democratic Party’s presidential nomination, has called for an end to spending for the new generation of nuclear weapons and their delivery systems. And, she and Adam Smith, the chairman of the House Armed Services Committee, are urging a No First doctrine. This is not enough. But after years in the shadows, the debate over nuclear weapons is returning to the center of the foreign and military policy debate.

There is campaigning for the NWPT, but the Back from the Brink campaign initiated by Physicians for Social Responsibility, the Union of Concerned Scientists, and supported by the Campaign for Peace Disarmament and Common Security (CPDCS) and the American Friends Service Committee is more dynamic and influential. Building on the tradition of the Nuclear Weapons Freeze campaign of the 1980s, the campaign is being won at the grassroots with town meeting, city council, and state legislative votes for its five components: renouncing first use, ending the president’s unchecked power to initiate nuclear war, taking U.S. forces off hair-trigger alert, cancelling the $1.7 trillion nuclear weapons upgrade, and “Actively pursuing a verifiable agreement among nuclear-armed states to eliminate their nuclear arsenals.”

In Massachusetts our statewide network has introduced nine bills for nuclear disarmament, ending the Yemen War, and moving the money from reducing military spending to meeting human needs.

CPDCS, in association with IPB, Peace and Planet and the Rosa Luxemburg Foundation is planning a major international peace and disarmament conference during the NPT PrepCom. The convergence of leading movement figures and disarmament advocates for the PrepCom provides an opportunity to analyze the emerging global disorder and how to build our movements in response. Our conference will also provide an opportunity to plan for a World Conference against A- & H- Bombs in New York, at the time of next year’s NPT Review Conference, to commemorate and build from the 75th anniversary of the A-bombings of Hiroshima and Nagasaki.

Finally, I want to point to a major CPDCS initiative: development of a vision for Common Security alternatives to today’s dangerous brinkmanship. Building on the traditions of the Palme Commission, which contributed greatly to the end of the Cold War, and with partners in Europe and Russia, we are developing an international statement that can serve as a clarion call for a new Common Security order and the international network to promote it. More challenging, given the growing authoritarianism in both the U.S. and China, is our commitment to developing a companion statement for U.S.-Chinese/Asia-Pacific Common Security. I look forward to engaging with Gensuikyo as we build the foundations for this important initiative.

In closing, let me root our sense of hope and our resolve in sayings that we all know to be true: Humans and nuclear weapons cannot long coexist: It is always darkest before the dawn. We make our road by walking. It is people who can bend the arc of history toward peace and justice. Together we shall overcome.”