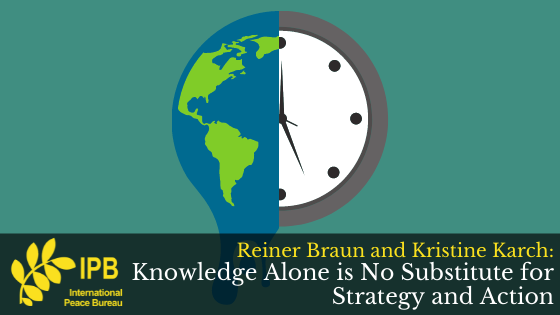 The facts are well known: the world is facing a double suicide, the fast one by nuclear weapons and the slower one by climate disaster.

2 trillion arms expenditures per year, and 14,000 nuclear weapons in the process of being replaced by new ones in all nuclear weapon states, are central material expressions of this madness.

Unrestrained arms export that fuel war on a daily basis and the automation and robotization of war intensified by AI development cast their murderous shadows.

Militarism has further dirty faces, however:

The knowledge about all these and other related facts is broad and diverse in the social movements.

Nevertheless, and this is the first remark on strategy, militarism hardly plays a role in the environmental movement, the movements for the development and emancipation of peoples, and the democracy and human rights movement, including in their political statements, strategies, and actions. Unfortunately, parts of the human rights movement can still be misused or used to legitimize wars and interventions.

In the Paris Climate Agreement, military emissions are excluded (due to pressure from NATO countries), so NATO does not have to report on its destruction of the environment. Criticism from environmental associations is scarce. Participation of the peace movement in civil society activities related to climate are equally low.

The UN’s Sustainable Development Goals are completely open-ended when it comes to funding, and the conference in Addis Ababa (July 2015) on possible funding was a disaster. 300 billion dollars per year are needed. Hardly anyone talks about the 2 trillion that are squandered annually on armaments spending (excluding Fidel Castro, who brought it up as early as 1972 at the first UN World Environment Conference).

There is much talk about the socio-ecological transformation. We refer here only to the politically serious considerations  – not to green washing deals, but rather to those that include changes in social structures, participation, emancipation, and new property relations overcoming patriarchal, oligarchic and monopolistic capitalist structures. This is also about “producing differently” and “living differently”.

Does peace, disarmament, or militarism appear in social-ecological transformation strategies? No, or hardly ever. But how should these honorable goals be achieved, if the money does not come from armament and war, if militaristic structures just strengthen the old structures of exploitation and growth every day? A social ecological transformation with 36 wars (2021) and far more than 200 conflicts (2021), is neither nationally nor globally possible.

It is hard to imagine that in a world of confrontation (see NATO vs. Russia, China) cooperative global solutions towards a social-ecological transformation and global justice are conceivable.

Nevertheless, it is still “pigeonholes” (social – ecological – peace) that determine our thinking and actions. The concept of socio-ecological transformation is just such a concept; the line of thought in the vast majority of social movements and civil society organizations is determined by it.

Global, networked thinking looks different. The World Social Forum certainly still has a need for discussions and also catching up on this subject, and   thefirst steps are to be seen with the on-line social forum 2021.

What does this mean for the strategy?

If dialectically correct, that global justice (including climate justice) is not possible without peace and that there will also be no comprehensive peace in the sense of the hexagon of Dieter Senghaas without global justice, the following conclusion can be reached:

We fight together for a great “social-ecological peace transformation”, which in a dialectical sense

It should be noted that (1.) this is impossible without democracy (air to breathe), without participation and emancipation, both in the struggle for transformation and in and aftermath of the successful creation of a new society; and (2) this transformation requires limits to growth and a replacement of the destructive growth philosophy, because of the limits of the planet. Why not start with the industry that is totally destructive and only destroying: the armament industry? Why not start by jointly demanding zero growth and a reduction to zero in armaments and the military? That would be good for peace, the environment, development, and democracy. This also includes the dissolution or overcoming of the strongest war alliance in history: NATO.

A strategy for the survival of the planet must therefore include:

In the 1980s, we had three international reports that opened the door to the future, gave impetus to many and brought about positive changes:

Today, these basic considerations can only be thought of jointly. This does not replace any singular movement, any action by individual organizations, but it does call for new political cooperation, new coalitions and, associated with these, new strategies.

The challenge is to develop a common understanding in the different social movements and in all of them together. New coalitions are needed and must emerge through a process of discussion and action. Mutual understanding and trust must be developed and strengthened.

Many open questions have to be discussed and answers have to be developed: how do we deal with the UN and its organizations, what do norms of international law and treaties mean for us, how can internationalism be reshaped under different social conditions, which structural changes are necessary in us and in our organizations? What are the subjective factors of these necessary changes, how can a cultural and social hegemony be achieved? In this context, the question of the roles of the labor movement, the new social movements and left-libertarian movements should also be discussed and – in our opinion – strategies developed for how these groups can be effectively brought together. This list of questions does not claim to be exhaustive, but is formulated as suggestions along which to think.

The approach to these challenges does not happen alone at the green table or only in intellectual discourse, as necessary as these are.

We must set out on the path toward this new cooperation of survival, of shaping the future. For this, joint actions are indispensable. Experiences and learning will accompany us on the way.

These debates must be considered and translate into actions:

What might be the entry point into this movement for a great social ecological peace transformation? What follows now are suggestions and ideas that have no claim to be exhaustive.

These suggestions are clearly written by people from the peace movement, therefore certainly “peace movement-heavy” but we are completely open to better conceptual, strategic and action-oriented thinking.

In conclusion, it only remains to emphasize: the path toward a socially ecological peace policy as a “world domestic policy” is only conceivable if we succeed in replacing the policy of confrontation emanating from NATO with a policy of “common security”. Through its cooperative dialogical approach, this policy offers the prerequisite for jointly tackling global challenges and for achieving fundamental social changes towards more global justice through a process of mutual understanding and dialogue against intense national and international resistance (from industry and politics).

Therefore, the sentence of Nobel Peace Prize winner Willi Brandt remains true today: peace is not everything, but without peace, everything is nothing.

Kristine Karch, Co-Chair No to War – No to NATO (No to NATO)
Reiner Braun, Director of the International Peace Bureau (IPB)