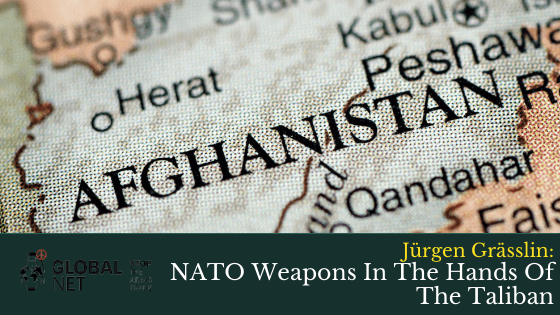 It really could not have been worse: With the seizure of power in Afghanistan, the Taliban have come into possession of a huge arsenal of state-of-the-art NATO weapons. From now on, they will be able to target these weapons at dissidents as well as people with different faiths or beliefs and use them to secure their rule.

Uncomplicated and free of charge – from NATO’s point of view, this completely unwanted arms deal could not have gone any easier. With the almost smooth takeover of power, the “Islamic Taliban Movement of Afghanistan”, or Taliban for short, got their hands on a huge amount of war material from the US Army and its allies in just a few days in August. This included large and small arms (such as aircraft and rifles), armaments (such as military off-road vehicles) and ammunition in huge quantities. Since the Afghan government forces abandoned most of their positions without a fight, the Taliban now have a frightening arsenal of fully operational high-tech weapons at their disposal.

Jake Sullivan, National Security Advisor to U.S. President Joe Biden, had to admit bluntly: Certainly, “a fair amount” of U.S. armaments “has fallen into the hands of the Taliban.”(1) The U.S. television station CNN even announced: “Taliban celebrate their new American arsenal”. The list of war materiel supplied by the U.S. to the Afghan military over the past 20 years is long. CNN mention advanced mine-resistant vehicles (MRAPs), Humvee military off-road vehicles, Black Hawk helicopters, 20 Tucano fighter jets, and more. Between 2013 and 2016 alone, the U.S. Army handed over to allied Afghan forces, among other things, some 80,000 vehicles as well as more than 600,000 light weapons such as M16 and M4 rifles.(2) Complementing this, the Wall Street Journal report that M24 sniper rifles are now in Taliban hands.(3)

The armament experts Karl-W. Koch, Andreas Müller and Wolfgang Wettach list in an analysis for the “Independent Green Left” that the Taliban “can take over an army equipped with the most modern Western weapons”, furthermore they have older looted weapons from the days of Soviet occupation.” These include “more than 600 M1117 infantry fighting vehicles and some 8500 Humvees (military off-road vehicles), more than 150 MaxxPro high-tech protected vehicles, 100000 upgraded off-road vehicles of the Afghan police of the Toyota Hilux and Ford Ranger type, 1000 infantry fighting vehicles, tanks and armored vehicles from Soviet stocks, 68 MD 500 Defender light attack helicopters. 19 Brazilian A-29 ground combat aircraft and up to 16 legendary ‘Blackhawk’ transport helicopters, four C-130 Hercules heavy transport aircraft, more than 100 Russian and Soviet transport and attack helicopters (Mi-17 and Mi-24), and the Afghan drone fleet, including several high-tech ScanEagle specimens from U.S. manufacturer Boeing.”(4) From now on, the Taliban will also be able to use German war equipment, because “from the beginning of 2002 until today, arms exports for 418.8 million euros have been approved to the Central Asian country.” The last export licenses were issued in 2021, reports Zeit-online.

This means that the worst-case scenario has come to pass: Not only has NATO lost the “war on terror” against the Taliban in Afghanistan – proclaimed after the terror attacks of 9/11. The problem is also not just that the former supporters of NATO troops, the United Nations and Humanitarian aid organizations who remain in the country can be hunted down, tortured or even killed. What is more, in just a few days the Taliban will have become the best-equipped terrorist unit in the world and will be able to stabilize and expand their military power.

Read this text in German (Original) and Spanish here.