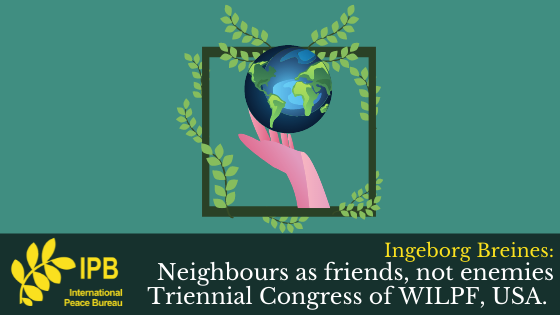 Speech given by Ingeborg Breines, Sigerfjord 21.08.21,  during the Triennial Congress of WILPF, USA.

Thank you for the invitation to briefly present some ongoing efforts to strengthen Nordic- Russian civil society relations and to reflect on whether the time now is ripe to try friendship with Russia, instead of animosity.

I am online with you from some beautiful islands in the north of Norway, way north of the Polar circle, made rather comfortable for living by the touch of the warm Gulf Stream. Norway, as you may now, has a common border with Russian in the extreme north and a negotiated dividing line in the Barents Sea/North Sea, regulating the rich fisheries, especially cod, as well as oil, gas and mineral drilling. This is especially important in a period when interest in the Arctic is growing as climate change opens for more exploitation of natural resources and for transport and traffic in the now partly ice-free North-East Passage.

Norway has never had any armed conflict with Russia. The people of the north, not least the indigenous Sami people, Finnish, Norwegian, Russian and Swedish, have over the centuries relied for their survival on exchange of goods, trade and good neighbourhood. All the countries of the Arctic, including USA and Canada, are members of the Arctic Council, an exceptionally important body for cooperation and understanding, which it is vital to keep non-militarized and non-politicized.

These new possibilities in the Arctic, unfortunately also attract strong commercial interests and add to the already high tension between the West, notably USA, and Russia. This tension is a major driver behind the present militarization and arms’ race, involving both conventional and nuclear weapons. Enormous resources are used on both sides on surveillance, not least of nuclear submarines hiding in the deep Norwegian fjords and under the polar ice. NATO and US military exercises in Norway are getting bigger and undertaken ever closer to the Russian border. Imagine if the same was done by Russia in Mexico on the US border! American weapon and ammunition depots, surveillance radars and bases with soldiers and fighter jets are being established in Norway close to one of Russia’s most important military installations, on the Cola Peninsula. It undermines the building of trust, so vital for real cooperation and for our survival and puts Norway at risk since none of the big powers would like a potential war to take place on their soil. This madness has to stop. Both missiles and submarines are to me symbols of a totally outdated and testosterone filled masculinity, based on muscular strength and might, which for far too long has been allowed to rule international relations.

It is important to look at the role of NATO in this context. NATO was established in 1949 as a North Atlantic defence organisation to stand up against what was perceived as a communist threat from the Soviet Union. As a counter move, the Soviet Union established, with other Eastern European countries, the Warsaw Pact in 1955. When the Soviet Union was dismantled, the Warsaw Pact closed down and the Cold War was over, there was no rationale any more for the existence of NATO. But instead of closing down, NATO has enlarged its domain way beyond the North Atlantic, has become by far the world’s largest military power and has undertaken a series of most unfortunate out-of-area wars, such as in Iraq, Afghanistan, Syria and Libya.

NATO had promised the Soviet president Mikhail Gorbachev not to move “an inch eastwards”, but quickly broke its promise, and now most of the former Eastern European states are members both of the EU and NATO. The US is in fact encircling Russia with military bases, which is seen as a provocation and spurs counter-actions. We are witnessing what looks like a new arms race and a race for military power also in space, even though Russia expresses the intention not to get into the same situation as during the last Cold War when they spent so much on the military that it impoverished the people.

The West, unfortunately, also failed to answer positively when president Gorbachev undertook a major change in their political system through glasnost and perestroika. There was a call for a common security, further reinforced by the Palme Commission, with a hope of mutual survival and not mutual destruction – a dream of peace from Vancouver to Vladivostok.

Russia is presented as a threat both in the media and in mainstream political rhetoric. Enemy images are created and leaders are being demonized. It creates suspicion and fear. A situation that is undesirable. Several questions arise: Why are these enemy images created, and by whom? Who benefits from such a situation? Simultaneously, enemy images of the West are created in Russia, although perhaps not so dominantly as the wish for normal relations seems to be stronger on the Russian side.

The US and NATO are far stronger than Russia both economically and militarily, the US’ military expenditure is e.g. more than 10 times that of Russia. There are no more any mayor ideological differences. Why would the West need to behave so negatively towards Russia? The only plausible answer is the exceptionally strong role of the military industry and the “security machinery”. Without a dangerous enemy, people would not accept to spend such enormous sums on military build-ups. If there are no enemies, there will be no military confrontations, and no need for military industry.

In May 2018 some 30 persons from different Nordic countries undertook a cultural and peace journey to Russia under the heading Neighbours as friends, not enemies. Our intention was to learn more about Russia, to network with the peace movement and, in a modest way, contribute both to mutual understanding and, if possible, also help reduce tension. We wanted to show that not everybody in the West is suffering from Russo-phobia.

We met with academics, peace activists, artists and journalists, mainly in Moscow and St. Petersburg. It had taken time to reconnect, but once there, we enjoyed the culture, historic monuments and the beauty of Moscow and St. Petersburg. Already at our first meeting at the Veteran House in Moscow, we started also enjoying the dialogue. We were told how pleased they were that we came ”with open and friendly faces”, as they said. They expressed sadness because of the isolation from friends and potential friends in the West. They had even feared that the Nordic peace movement was dead. Somewhat similar to what we had feared about the Russian peace movement. They had invited lots of people to meet us; they offered song and music, food and food for thought and we were overwhelmed by the warm reception. Language was sometimes a barrier, which we also felt in the preparations, and we remain grateful for the valuable help we got from the Russian Embassy in Norway. And, let it be said, there were no attempts what so ever of recruitment by any intelligence or spy facility.

The Russians reminded us that the Soviet Union lost some 27 million people during WWII and that almost every family in Russia has lost a loved one. This is still so fresh in their minds that they insist that they would not want any new war. It was also clear that the Russians rightly take pride in the liberation of North Norway from the Nazis during WWII and feel they have not gotten sufficient thanks for their huge contribution to the overthrowing of Hitler.

As a follow up to our trip, and in order to consolidate our efforts, the Women’s International League for Peace and Freedom, Norway, and the Norwegian Peace Association organized a Nordic-Russian civil society seminar at the Peace Research Institute Oslo in February 2020. We are now in the final stage of planning a new seminar in November.

At the Oslo seminar, participants had open discussions on how to promote peace, disarmament and a sound environment, and agreed to seek ways to continue practical and strategic forward-looking initiatives and solution-oriented dialogues. Different alternatives were discussed as to how we can contribute to changing attitudes on both sides in order to reverse the nuclear and space-arms race, reduce defence spending and get us out of the dominant growth oriented, militarized, confrontational and competitive patterns and build common security, human security and a culture of peace and non-violence.

And it was considered most vital to build trust between peoples, so essential for real cooperation.

The broad majority of major world leaders, however, continue to act as if military might is the answer to the challenges of the day, totally emerged as they are in the old Roman motto: If you want peace, you have to prepare for war (Si vis pacem, para bellum). We need to prove that this thinking is dangerous, naive and obsolete. If we want peace, we have to prepare for peace and we need to address the root-causes of conflicts, not only the symptoms.

It seems obvious that we cannot continue to misuse the world’s resources, both financial and intellectual, for military purposes. According to SIPRI the world spends more than 1.9 trillion dollars a year on the military, which corresponds to more than 600 regular UN budgets. With this imbalance, how can the UN be able to do its work properly? Additionally, this excessive military spending cannot provide the security we want. The military actually makes us less safe, both economically and ecologically, by taking so much of the resources that are needed for other purposes and by the enormous greenhouse gas emissions, the radiation and pollution it provides. It is high time to understand that we cannot allow the military to be an exception to international climate agreements and continue to make very heavy boot prints on the soil, the water, the air and even the atmosphere.

We risk instead destroying our beautiful planet, the home to all life as we know it. Existing military forces should instead be converted and retrained to fight the global climate and environmental crisis, which warrants urgent remedial actions and an holistic approach which again requires changing attitudes and rethinking also the unsustainable and destructive production and consumption patterns.

We all have work to do!