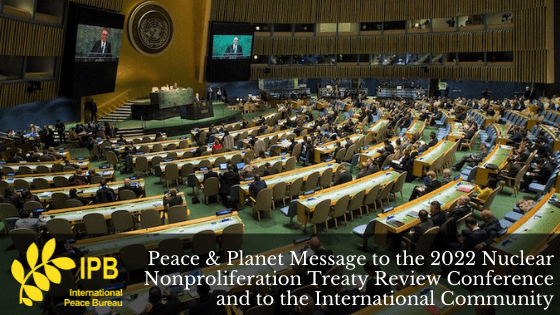 (Image: meeting of the 2015 Review Conference of the Parties to the Treaty on the Non-Proliferation of Nuclear Weapons (NPT) DSG wide. Image by meetings.unoda.org)

In 1955, at the height of the Cold War, the philosopher Bertrand Russell and the physicist Albert Einstein issued an appeal to the world to prevent nuclear holocaust. Most compellingly, their appeal stated:

“There lies before us, if we choose, continual progress in happiness, knowledge, and wisdom. Shall we, instead, choose death because we cannot forget our quarrels? We appeal as human beings to human beings: Remember your humanity and forget the rest. If you can do so, the way lies open to a new Paradise; if you cannot, there lies before you the risk of universal death.”

Today, the Bulletin of the Atomic Scientists’ Doomsday Clock, set at 100 seconds to midnight, warns that humanity stands at the brink of apocalypse due to the twin existential threats posed by nuclear weapons and climate change. As stated by The Bulletin:

“Accelerating nuclear programs in multiple countries moved the world into less stable and manageable territory last year. Development of hypersonic glide vehicles, ballistic missile defenses, and weapons-delivery systems that can flexibly use conventional or nuclear warheads may raise the probability of miscalculation in times of tension.” Continuing preparations for nuclear war by the nine nuclear powers and the climate emergency are compounded by “the continuing corruption of the information ecosphere on which democracy and public decision-making depend.”

Solutions to these threats are readily apparent: fulfill the Nuclear Nonproliferation Treaty’s promise of a nuclear weapons-free world; end the use of fossil fuels; and make massive investments in green energy alternatives.

The entry-into-force of the Treaty on the Prohibition of Nuclear Weapons (TPNW) is a landmark achievement of the international peace movement, anti-nuclear Mayors, Parliamentarians, and governments.  The realization of the TPNW demonstrates that the majority of the world’s nations stand in judgement – even outrage – at the failure of the original nuclear-armed states – joined now by additional nuclear powers – to fulfill their Nuclear Nonproliferation Treaty (NPT) Article VI obligation to engage in good faith negotiations for the complete elimination of the nuclear arsenals. Trust has been further shattered by the nuclear weapons states’ failure to fulfill commitments reinforced by agreements made in connection with NPT Review conferences in 1995, 2000 and 2010, including an “unequivocal undertaking” to  accomplish the total elimination of their nuclear arsenals.

The NPT’s disarmament obligations were universalized by the International Court of Justice, which in its 1996 Advisory Opinion issued an authoritative interpretation of Article VI, finding unanimously: “There exists an obligation to pursue in good faith and bring to a conclusion negotiations leading to nuclear disarmament in all its aspects under strict and effective international control.

Yet today, the nuclear powers are spending trillions of dollars to upgrade their omnicidal nuclear arsenals and delivery systems. Provocative military actions in the midst of increasing confrontations between the U.S. and NATO versus China and Russia, in Northeast Asia and in South Asia, heighten the danger that an accident, an unintended incident, or a miscalculation could ignite military – potentially nuclear – conflicts

The nuclear powers’ failure to fulfill their NPT obligations, their increasing investment in and reliance on nuclear weapons, ongoing “first use” nuclear warfighting doctrines of countries including the United States and Russia, and development of overwhelming conventional high-tech weaponry, encourage political and economic forces in other nations to seek their own nuclear “deterrent,” further increasing the dangers of nuclear catastrophe.

Even short of nuclear attacks, nuclear weapons devastate human lives as a consequence of radioactive poisoning from their production cycle and the diversion of essential human and financial resources: from stanching the Covid-19 pandemic and addressing other health crises; from the rising waters, devastating storms, and massive fires of the climate emergency; and from hunger, homelessness, and hopelessness.

The vision and possibility of a nuclear weapons-free world have existed since the earliest calls from Hiroshima and Nagasaki A-bomb survivors, the world’s scientists, international civil society, and sobered national leaders and diplomats who understand that nuclear wars can never be won and must not be fought.

We call on the peace movements of the world for: