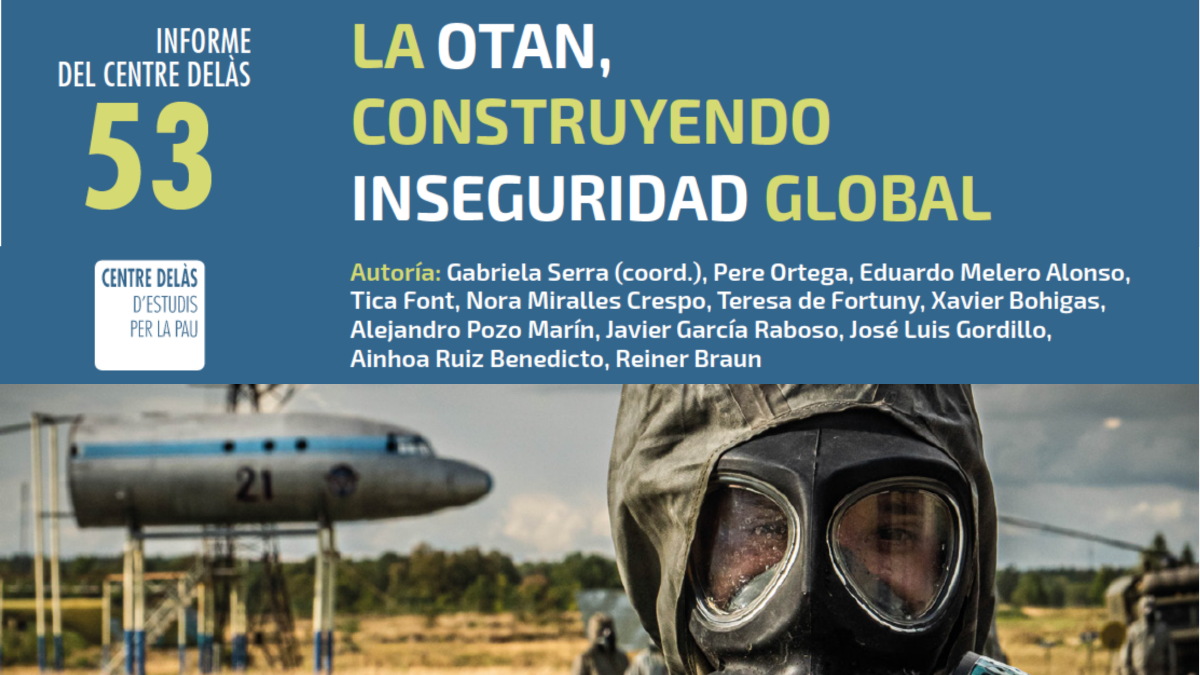 On the 25th of June, at the occasion for the Peace Summit Madrid 2022, the Centre Delàs d’Estudis per la Pau, in collaboration with the International Peace Bureau (IPB) and the Global Campaign on Military Spending (GCOMS), issued its 53th report under the name “NATO, Building Global Insecurity” (La OTAN, Construyendo Inseguridad Global” in the original) with the coordination of Gabriela Serra and contribution of many authors.

This report on the North Atlantic Treaty Organization (NATO) presents an updated and detailed reading of military alliances, taking into account the global context of simultaneous crises and the increase of the tensions caused by the invasion of Ukraine at the beginning of 2022.

“NATO’s modus operandi is reflected in its Strategic Concepts, and from the last two approved we can draw some conclusions that help us understand the Alliance’s objectives: on the one hand, it attempts to promote a broad conception of defense, which it makes it possible to greatly expand its scope of action to deal with “new threats”, many of them non-military; There is also an attempt to make submission to the Charter of the United Nations more flexible, situating itself in what has been described as “legal deregulation of war”; Similarly, NATO expands its geographical scope of action beyond what is established by the North Atlantic Treaty, as happened in the case of Afghanistan; Lastly, the democratic deficit with which this strategy is decided, which breaks the most basic rules of parliamentarism, is notable. In June 2021, a new Strategic Concept will be approved in Madrid which, predictably, will focus on reinforcing deterrence and defense, which is equivalent to increasing all military capabilities, whether nuclear, conventional or cyber. It will also include an express reference to the relationship with China, which it considers a “systemic challenge.” In addition, it will state that it will not only respond to armed attacks, but that NATO could intervene militarily against any threat to its security (…)

Therefore, this publication defends the “No to war, no to NATO”, as an amendment to the whole, to a predatory militarism of lives and human resources, of habitats, of economies. peace is not only a hackneyed slogan, but a relationship policy that must be deployed at all levels, from the interpersonal to the interstate, now more than ever”

At the adjunct (annex), from pages 47 to 49, you can find the contribution of Reiner Braun – Executive Director of the International Peace Bureau (IPB) – addressing the Olof Palme Report “Common Security 2022: For our Shared Future”, focusing on how Common Security serves to avoid disasters regarding nuclear armament and militarization. The Common Security report aims to encourage that “in times of acute crisis, there must be those who look forward and give a vision of a better future”, complementing in many ways the words of Centre Delàs’ report.