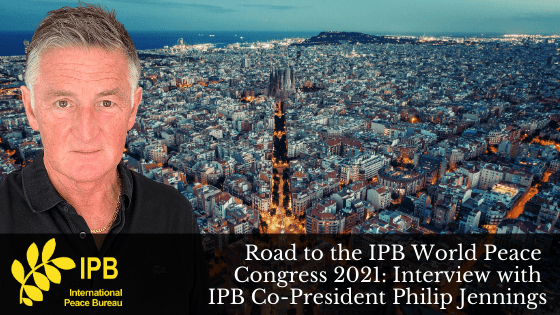 IPB will hold its Second World Peace Congress in the Mediterranean city of Barcelona from October 15-17 2021. We’re counting on a large international gathering – both in person and virtual – and including a variety of peace and social movements and activists. We sat down with IPB Co-President Philip Jennings to discuss the overarching ideas behind the congress.

Q: What is the significance of the timing and location of the congress? Why 2021 and why Barcelona?

The IPB Barcelona Conference aims to be the largest gathering of activists for peace in 2021, the year that the United Nations has declared the International Year of Peace and Trust. It’s also a big year for IPB, as we celebrate our 130th anniversary and as we approach the 40th anniversary of the Olof Palme report on common security; the time has come to develop a new blueprint for common survival.

Barcelona is a city of peace – one of the few in the world with an organized and resourced commitment to promote and campaign for peace – and it has opened its arms to the IPB, with both the city and the region playing an active role in preparing for the congress.

The city is the home of our host and IPB member, Centre Delàs, which is a hive of activity for peace, research, and campaigns regionally and globally. The IPB has a unique presence at Centre Delàs, where the Global Campaign on Military Spending (GCOMS) is based and animated.

Barcelona also sits on the Mediterranean Sea – a region which brings together Africa, Asia, and Europe which will serve as a central point of the congress.

Q: What is the global situation under which the congress is organized and how does it contribute to the content of the congress?

The Covid-19 pandemic has revealed the fault lines in the world and made clear the demand for new responses. The Heidelberg Institute for International Conflict Research reports that there were 196 violent conflicts worldwide in 2019; there are 80 million refugees fleeing conflict. We see that neoliberal capitalism has failed, the global pandemic rages on, the climate emergency is real and urgent, the inequality chasm continues to grow, and fascism, racism and discrimination are on the rise globally. A shortage of vaccines, jobs, wages, housing, schools exists in a world with an excess of nuclear weapons, increasing arms expenditure (at nearly 2 billion US dollars in 2019) and a booming arms industry. The doomsday clock stands at 100 seconds to midnight. Time is running out.

All of this is a recipe for disaster imposes an existential threat for mankind; but there must also be hope and action to create a better future.

At this time of global crisis, we have to mobilize for peace; it should not be left in the waiting room of policy debate as we demand sustainable societies. Now is the time to re-energize and organize for that sustainable planet and peace.

This is how we came to the congress slogan, which will be (Re-)Imagine our World: Action for Peace and Justice. We believe the congress can provide activists around the world with not only hope, but new ideas, resources, and plans to take action in 2021 and beyond.

Q: What are the expected results of the congress? What will participants have gained by the end?

We have been globalizing the reach and work of the IPB and the congress will demonstrate how the peace movement and activists in all parts of the world have made peace happen.

The beating heart of the congress will be the active involvement of all those mobilizing for peace, environmental, economic and social justice around the world. We aim to bring together all these activists and movements to connect the dots and build stronger relationships between us – delivering the message that we are stronger together when we seek change. At the end of the day, peace cannot be reached without environmental, economic, and social justice, and justice cannot be reached without peace.

We have no choice but to organize to change the rules. Our movement has called for a global reset, to build back better; that’s why we want to re-imagine our world.

We want the young activists to attend, for them to learn from one another, to encourage one another and for us to work not just for yet another declaration but to organize and take action for peace and justice. Thus, the outcome must be cooperative action.

At the time of the conference, we will mark the 50th anniversary of the release of John Lennon and Yoko Ono`s “Imagine.” Under the Barcelona skies, we have to, in their words `imagine all the people, living life in peace,` so that one day, `the world will live as one`.