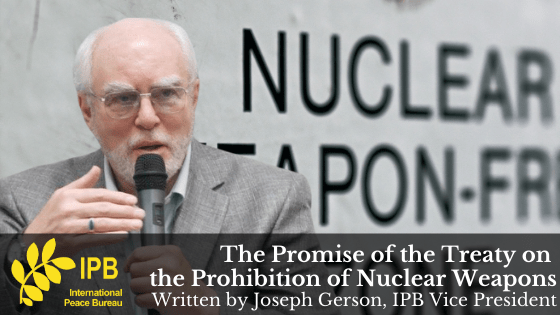 The Treaty on the Prohibition of Nuclear Weapons (TPNW)  has received the last ratifications needed to put the Treaty into force. With the milestone of 50 ratifications having been achieved, the next critical step will be winning the signing and ratification by one or more of the nuclear weapons umbrella states, a European NATO member or one of the newly christened, “quad”, envisioned as an Asia-Pacific NATO: Japan, Australia and India. (The U.S. being the fourth member of the quad.)

Governments won’t altruistically risk offending the world’s declining hegemon on their own. As we have seen in the past, they can be moved, their policies and commitments changed, in response to public opinion, public debate, and popular mobilizations.

I write as it is reported that the last three national ratifications needed to put the Treaty on the Prohibition of Nuclear Weapons (TPNW) into effect are expected prior to Monday’s 75th anniversary of the founding of the United Nations. In fact, as Beatrice Finn of ICAN reports, not three but ten governments are moving to ratify the Treaty in time for the anniversary.

The forums and institutions the Treaty will create, and the political forces it will unleash could not come at a more opportune moment. The Bulletin of the Atomic Scientists has issued its starkest warning ever: the world is 100 seconds to Doomsday, the closest since the beginning of the Cold War. Each of the world’s nuclear powers is upgrading its nuclear arsenal. In the South and East China Seas and the Taiwan Strait, a military incident, accident, or miscalculation, like the 1914 gunshots in Sarajevo, could ignite an ever-escalating war. The same applies to the Baltic and Black Seas, where provocative U.S. and Russian military “exercises” – including U.S. flights of nuclear capable B-52 bombers – could precipitate catastrophe.

The Treaty’s negotiation and initial promulgation by 122 nations at the United Nations in 2017 should be recognized as a signal achievement of the Hibakusha, those of Hiroshima and other nations from the Marshall Islands and Australia, to Utah and Semipalatinsk downwinders. Their steadfast insistence on sharing their emotionally searing testimonies about what they, their families, and communities suffered, refocused the international debate  away from the sterile and deceitful focus on ostensible state security preoccupations to what nuclear weapons actually do,  the devastating humanitarian and environmental consequences of nuclear weapons and nuclear war. In forums like the annual World Conferences in Hiroshima and Nagasaki, and the three International Humanitarian Consequences of Nuclear  Weapons in Oslo, Nayarit and Vienna , the Hibakusha opened, seared, and won people’s hearts and minds including the diplomats who initiated the TPNW negotiations at the United Nations.

In essence, the TPNW prohibits nations that have ratified the Treaty from “developing, testing, producing, manufacturing, acquiring, possessing, or stockpiling nuclear weapons or other nuclear explosive devices.”  They are barred from transferring or receiving nuclear weapons and nuclear explosive devices, meaning that they cannot permit nuclear weapons to be stationed or deployed in their countries. They are forbidden to exercise any control over nuclear weapons or to provide assistance for any actions prohibited by the Treaty.  They are obligated to assist victims of nuclear weapons and to join environmental remediation efforts. And, of potentially great importance, Article XII of the Treaty requires governments that have ratified the treaty to press nations outside of the Treaty – including Japan and the United States – to sign and to ratify it.

If they have the necessary courage and imagination, over time Treaty nations could exercise the political, diplomatic economic power and moral suasion needed to universalize the Treaty. As Alexander Kmentt, the former Austrian Disarmament Ambassador who was so moved by Hibakusha testimonies in Hiroshima and Nagasaki and who led the organizing for the Vienna Humanitarian Consequences conference recently observed this will be a long term process, but it is a goal that with steadfastness can be achieved.

The TPNW should not be necessary. Fifty years ago, in Article VI of the Nuclear Nonproliferation Treaty (NPT), the nuclear powers committed to “pursue negotiations in good faith on effective measures relating to cessation of the nuclear arms race at an early date and to nuclear disarmament.”  The following year, the U.N. General Assembly’s first resolution mandated the ‘control of atomic energy to ensure its use only for peaceful purposes,’ and ‘the elimination from national armaments of atomic weapons and all other major weapons adaptable to mass destruction.”

Forty years after the NPT came into force, at the conclusion of the 2010 NPT Review Conference, the nuclear powers agreed to implement 13 practical steps for the systematic and progressive disarmament of the world’s nuclear weapons with an “irrevocable commitment.”  Now, in 2020, only one of those steps has been taken.

Rather than fulfill these international legal obligations the nuclear powers led by the United States have steadfastly resisted taking the steps needed to create the nuclear weapons-free world that can help to ensure humanity’s survival. They have continually upgraded their genocidal and potentially omnicidal nuclear arsenals, refined their nuclear warfighting doctrines, and repeatedly prepared and/or threatened to initiate nuclear war. (In his new book The Bomb, the journalist/scholar Fred Kapan describes how Donald Trump’s “Fire and Fury” threats and preparations for nuclear war brought the world much closer to nuclear catastrophe than all but a few knew.)

The nuclear weapons states have undermined, but not completely destroyed, the NPT’s legitimacy by refusing to fulfill their Article VI and 2010’s “irrevocable” commitments. These failures which jeopardize human survival, along with the political heat created by the Hibakusha’s urgent truth that “human beings and nuclear weapons cannot coexist”, and the consistent demands of the world’s diverse peace movements led to the negotiation, signings, ratifications and now the entry into force of the TPNW.

While the TPNW in and of itself will not dismantle a single nuclear warhead, it has placed those who are preparing nuclear Armageddon on the defensive.

From the beginning and led by the United States, the five original nuclear powers opposed the negotiation of the TPNW and the Treaty itself, falsely claiming that it jeopardizes the NPT. In fact, as Ambassador Kmentt reiterated, the TPNW complements and reinforces the NPT.

The P-5 boycotted the negotiations, spoke against the TPNW in diplomatic forums and press conferences, and exerted enormous pressure on dependent nations not to sign or ratify the treaty. As the Associated Press (AP) reported, on the eve of the 50th ratification, stating that the nuclear powers “stand unified in our opposition to the potential repercussions” of the TPNW, the Trump administration is pressing governments that have already ratified the Treaty to withdraw their ratifications.

As the old saying has it, this is pissing in the wind, the equivalent to trying to silence the oceans tides. Trump, Putin, and their comrades will be no more successful in preventing the Treaty from coming into force than they have been in containing Covid which is not about to “disappear”.

Ninety days after the 50th ratification is registered with the United Nations, the TPNW will come into force. A signal achievement, it will mark the beginning of a new phase in the struggle to create a nuclear weapons-free world.  Hiroshima and Nagasaki Hibakusha and the Japanese peace movement have long led the struggle to eliminate nuclear weapons. Their campaigning played an enormous role in bringing the TPNW into being. As indicated above, the most immediate TNPW challenge now is to win the signing and ratification of one or more “umbrella” states. Such a victory, breaking ranks with the nuclear powers, would be the unraveling of the thread of nuclearism that holds the nuclear disorder in place.

Given Japan’s history as the only nation to be attacked by nuclear weapons in wartime and the majority support for the TPNW across country, winning Japanese government support for the Treaty may simply be a matter of time. But this victory can only be won through widespread and dedicated advocacy and action.

Obviously, those of us who are U.S. citizens have the moral responsibility to transform the policies, doctrines, and actions of the world’s most threatening nuclear power. The NPT’s promise of a nuclear weapons-free world and 2010’s 13 steps must be honored and fulfilled.

In eleven days the seemingly endless U.S. presidential election will come to an end. Should Trump prevail via the undemocratic Electoral College system (written into the Constitution 231 years ago to defend slavery), or via a post-election coup, we will face a daunting horizon: the consolidation of a Trumpian tyranny and the doubling down on the Pentagon’s extremely dangerous campaign to restore U.S. first-strike supremacy.

The polls are offering limited hope. After four years of dysfunction, deceit, disrespect and disaster, former Vice-President Biden appears to be on track to win the election. Biden won’t be signing the TPNW any time soon. Should he prevail, despite his promise to work for a nuclear weapons-free world, the upgrading of the U.S. nuclear arsenal and Washington’s preparations to fight and “win” a nuclear war will continue.

But, if we keep our eyes on the prize, the four years of a Biden presidency will give us time, political space, and opportunity to take the next steps in the long march begun by the Hibakusha.  We will insist that Biden honor his articulated commitment to a no first use policy.  With the urgent need for post-pandemic, post-Trump economic and social revitalization, of necessity there will be a powerful guns or butter debate over national budget priorities, opening the way to restore the JCPOA agreement with Iran, renewed commitment to arms control if not nuclear weapons abolition, and to seriously reduce spending to upgrade Washington’s nuclear arsenal and its delivery system.

This week Ambassador Kmentt offered the vision of the TPNW igniting “societal discussion” as in the 1980s, about the urgency of nuclear disarmament.  In corners of the imperium, like the Massachusetts state legislature, where legislation has been introduced to initiate a study of what the state would need to do to conform to the TPNW, to press for massive nuclear weapons spending cuts and for the country to fulfill its Article VI NPT commitments, that societal discussion has begun.

*Dr. Joseph Gerson is President of the Campaign for Peace, Disarmament and Common Security and author of With Hiroshima Eyes and Empire and the Bomb.