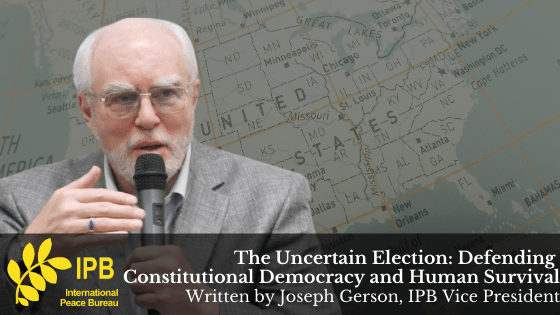 In the run up to the U.S. election, Daniel Ellsberg, the courageous whistleblower who risked 115 years in prison in the early 1970s for revealing the Pentagon’s secret history of the Vietnam War in his effort to stop the killing, wrote that the country was “facing an authoritarian threat to our democratic system of a kind we’ve never seen before.” Despite differing with Biden on many issues, he urged people to vote for Biden  “to free the nation from Trump’s unhinged and destructive grip” – not least because four more years of Trump racism and maximizing the use of fossil fuels would be calamitous. “World civilization”, he wrote, “cannot afford another four years of Trump’s presidency.

Now we must be patient and steadfast in our demand that every vote be counted. Given our peculiar and undemocratic electoral college system, even as the Biden camp is increasingly hopeful that it will prevail, the election outcome may well depend on if and how votes in Pennsylvania are counted. There, less than 2/3 of the votes – none of them predominantly Democratic ballots – have been counted.  And, as anticipated, like W. Bush in 2000, Trump has gone into the courts, which he and the Republican dominated Senate have stocked with right-wing toadies, to halt the Pennsylvania ballot count and thus steal the election.

Yet, at the same time, the Protect the Results coalition opted not to call out people to join planned mass demonstrations in 400 cities and towns across the country. That could happen tomorrow (Thursday) or in the coming days, but they are hopeful that Biden can prevail without our going into the streets.

Although there were disturbing incidents and widespread voter suppression, threatened right-wing violence and intimidation at the polls proved to be minimal. But domestic peace is hardly assured in what could prove to be a drawn-out struggle. Mass demonstrations may prove necessary to protect the election result, and armed right-wing militias (actually gangs) could stoke violence as they did during the summer’s Black Lives Matter protests. Many state governors have called national guard troops up for duty against the possibility of “disturbances”. In some states, this could mean violent repression of the peaceful protests for which thousands of citizens have been trained in recent months.

With the outcome of the ritualized political warfare termed an election still in doubt, several things are clear:

1) Contrary to pre-election polling which anticipated an easy Biden victory, Trump has done much better than anticipated – even as the pandemic rages across the country – especially midst his maskless southern and midwestern base.

There is no denying that the United States has its 21st century Mussolini. At least as disturbing is that despite Trump’s murderous failures in dealing with Covid-19 (230,000 dead. 7,000 infected and 300 dead among participants in Trump’s recent rallies), the resulting painful economic recession, and the tyrant’s more than 20,000 lies during the past four years, his base has remained loyal. Trump once said that “I could stand in the middle of Fifth Avenue and shoot somebody, and I wouldn’t lose any voters.” This seems to be true, with his racist, authoritarian, and armed militia constituting a U.S. 21st century reflection of Italian fascism.

2) Structurally, once again a conservative Democratic presidential candidate has won the popular mandate by at least 3 million votes, but that may not prove sufficient to put Joe Biden into the White House.

The novelist William Faulkner wrote that “The past isn’t dead. It isn’t even past.” More than two hundred years ago leading figures from the colonies that had recently won independence from Britain gathered to write the country’s constitution They were the white male elite representatives of the landed gentry, land speculators and northern merchants. Back then people’s identity was tied more to their communities and individual state than to the nation. The constitution was thus written to protect the power and privileges of the southern slave and smaller states: Slaves were counted as 3/5 of a human being. Instead of majority rule – even among property owning white men, who were deemed sufficiently worthy to vote – the president was to be elected by an unrepresentative electoral college. And, each state – regardless of vast differences in population – was allocated two Senate seats.

Not quite a century later, faced with their waning economic and political power, the slave states created a “Confederacy”, attempted to secede from the Union, and lost in a devastating civil war.

The historian David Blight explains that Democrats are a loose coalition held together by commitments to inclusion, active government, faith in humanistic and scientific expertise, and an abhorrence of the “monstrous presidency of Donald J. Trump.”  Republicans, with exceptions, he observed are a coalition committed to tax reduction, corporate power, anti-abortion white nationalism and “the sheer will for power.”

Today, the political and moral compromises made in 1789, and the revitalized and expanded confederacy that now extends across the predominantly rural midwestern states may return Donald Trump to office.  The consequences for constitutional democracy, people of color, the climate, people’s access to healthcare, economic security and justice would be catastrophic.  Even if Biden prevails, with the new confederacy as its base, the Republican controlled Senate and Supreme Court will severely limit his efforts to legislate essential economic, social, and climate emergency reforms.

Faster or more slowly, the U.S. will continue its path of relative decline

3) The election outcome will certainly impact U.S. foreign and military policies, which is to say who lives, who dies, and how.

The military-industrial complex remains confident regardless of the election outcome. As Defense News reported, “defense industry executives projected calm ahead of Tuesday’s election.” Even as the pandemic and Trump’s gargantuan tax cuts for the wealthy place great pressure on the national budget, and progressive Democrats in Congress will press for significant Pentagon spending cuts, Defense News reported that “industry is banking on Washington’s drive to prepare militarily for a rising China, a disruptive Russia and an unpredictable North Korea.”

Trump and Biden are both committed to U.S. hegemony, even as their strategies differ. Both are wed to the “pivot to Asia”, the new military, economic, diplomatic and soft-power Cold War with China. Biden is committed to revitalizing U.S.-European relations and the country’s military alliances around the world and to confronting Putin’s Russia. With the U.S. building the quad – a mini NATO – to contain China, like Trump, Biden would support the newly conceived Indo-Pacific alliance structure. How Trump will relate to NATO is anyone’s guess.

Biden would extend the New START Treaty with Russia (as Trump may still do). He has signaled an openness to cutting funding for the replacement of land-based ICBM’s and to considering a no first use nuclear warfighting doctrine in his promised updating of the Nuclear Posture Review. But Biden is hardly a nuclear abolitionist. The upgrading of the nuclear arsenal to reinforce its omnicidal threats and potential throughout the 21st century would continue apace and would not be limited to the coming and very dangerous deployment of new B-61-12 nuclear weapons to Europe.  One hopeful note is that Biden would attempt to resuscitate the nuclear deal with Iran.

Trump will remain committed to the massive and costly upgrading of the U.S. nuclear arsenal – now estimated to cost $1.7 trillion, while slashing health care and other essential social services. He and Pompeo could all too easily stumble into a war with Iran.  And, the world would have continued reason to worry about this mercurial figure having his finger on the omnicidal nuclear button. Recall that former Secretary of Defense Mattis ordered nuclear weapons not be fired without his express orders, lest the president initiate a nuclear war midst one of his rages.

4) All of which is to say constitutional democracy and so much more hang in the balance. Every vote must be counted. And committed advocacy and organizing for democracy, peace, justice, and the climate must continue.