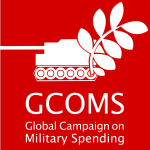 In December 2014, the International Peace Bureau (IPB) announced the launch of a permanent, global, year-round campaign to tackle the worldwide issue of excessive military spending. In 2014 the world’s governments spent over USD 1700 billion on the military sector. This is money that could instead be spent on creating jobs for young people, feeding the hungry, protecting us all from the effects of climate change, tackling epidemics…and much more. IPB has for several years called for annual reallocations of (as a minimum) 10% from the military budgets of all states; and for a process to be started to reduce arms production as well as the international weapons trade.

IPB’s concept of the 5 Directions would mean that money released from the military budget could be made available to 5 broad alternative areas:

These are all part of a wider global transformation towards a culture of peace.