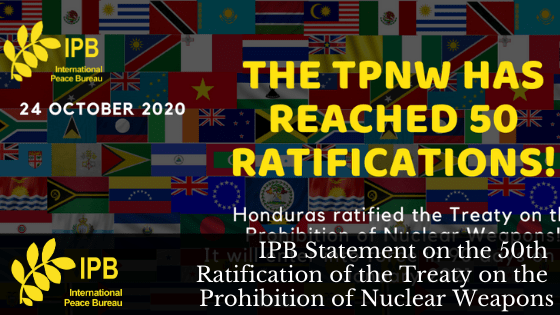 The International Peace Bureau celebrates the historical step of the 50th ratification of the Treaty on the Prohibition of Nuclear weapons, supported by over 120 states at the UN in July 2017.

After 3 years of debates, pressures, and mobilisation, 50 countries have today finalised the ratification of the Treaty on the Prohibition of Nuclear Weapons (TPNW). It is a radical step toward the complete elimination of this inhumane and outdated weapon of mass destruction!

Each of these courageous 50 countries as well as the 84 that have signed it, deserve our admiration in times of international tensions and blackmail, when the 9 nuclear weapons possessors -among them the 5 permanent members of the Security Council -have done everything to prevent this historical step to happen.

In this moment, we also pay tribute to generations of activists that have tirelessly raised awareness about the humanitarian impact of nuclear weapons, since the bombing of Hiroshima and Nagasaki in August 1945. The victims of these bombings and the survivors, the Hibakusha are today in our hearts to celebrate together a new era : nuclear weapons are officially illegal in 90 days when the TPNW will enter into force.

Now, we focus our work on the universalisation of the TPNW, that all States have to ratify. Until then, we call every peace lover to celebrate this historical step, and deliver this great news with noise and fun, as the road to a world free of nuclear weapons is now wide open!