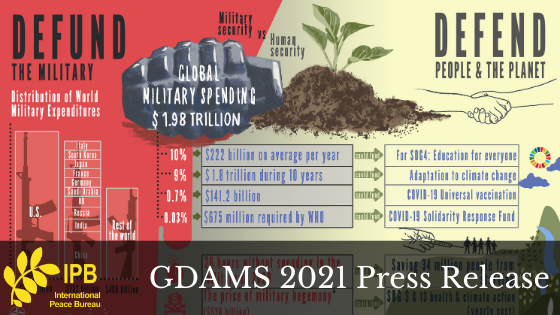 170 Civil Society Organizations from 33 different countries demand that governments around the world drastically reduce their military expenditures, which reached almost 2 trillion $ in 2020, a 2.6% increase over the previous year.

On Monday, April 26th, the Stockholm International Peace Research Institute (SIPRI) published the new figures for global military spending in 2020. The world spent $1.98 trillion on the military during the first year of the coronavirus pandemic, a 2.6% increase over the previous year and the highest figure since the end of the Cold War.

The aggregated military expenditures of NATO member states reached $1103 billion, which accounts for 56% of the world’s total. Nearly all members of the alliance saw their military burden rise in 2020. As a result, 12 NATO members spent 2 per cent or more of their GDP on their militaries, the Alliance’s guideline spending target, compared with 9 members in 2019. France, for example, the 8th biggest spender globally, passed the 2 per cent threshold for the first time since 2009. NATO has increased its military expenditure of 13.6% over the previous year.
The aggregated spending of EU member states amounts to 233 billion, 12% of the world’s total spending, and the 3rd highest after the U.S. and China.

In the context of the Global Days of Action on Military Spending (GDAMS), 170 civil society organizations from over 30 different countries have come together to urge governments to drastically reduce their military expenditure and make human security-oriented sectors, such as health and the environment, the priority of public policies and budgets. The COVID-19 pandemic and the climate crisis have generated a global consciousness on the need to invest in these sectors, however, the latest figures of military expenditure go in the opposite direction.

To make visible the outrageous opportunity cost of these expenditures our campaign has prepared this infographic. It illustrates current levels of military spending, and compares them with the cost of human security-oriented spending, including programmes related to the SDGs, the COVID-19 pandemic and the climate emergency.

A 9% of the world’s total spending during the next 10 years could finance the adaptation to climate change the Global Commission on Adaptation proposes; A 10% reduction of the world’s military spending could finance education for every person on earth (Sustainable Development Goal 4); 26 hours without spending money on the military could save 34 millions people from starvation; The last 4 years of EU member states military expenditures could finance the European Green New Deal. These are just some comparisons which help understand the magnitude of the squandering that military spending means for our societies.

You can download this infographic in high quality here.
References and sources on this link.

The world spent $1.98 trillion on the military in 2020[1], a 2.6% increase over the previous year and the highest figure since the end of the Cold War. Our governments’ ever-growing military capacities, in the name of national security, have proved themselves completely useless to defend people from the COVID-19 pandemic, nor can they keep us safe in the face of other global emergencies such as climate change. In addition, as the victims of the wars in Afghanistan, Iraq, Yemen and elsewhere can testify, militarism makes conflicts worse rather than resolving them.

Current levels of military spending not only fail to provide true security, but they actually stand in the way of just and comprehensive solutions to the problems urgently demanding our attention. Indeed, the military power our rulers are so committed to -including new great power Cold Wars – helps create and sustain the very emergencies, tensions and injustice that they claim they are protecting their populations against.

We therefore demand that governments across the globe drastically reduce their military expenditures, especially those accounting for the largest shares of the world’s total spending, and reallocate the freed-up resources to human and common security-oriented sectors, notably for confronting the coronavirus pandemic and the eco-social collapse we are now facing.

Now is the time for a reset of our priorities as societies, and a new defense and security paradigm that puts human and environmental needs in the center of policies and budgets.

We need to defund the military if we are to defend people and the planet.

The list of Organisations endorsing this appeal is the following:

Actions for development and empowerment (CM)

Campaign for Peace Disarmament and Common Security  (US)

Chair of Friends for Peace Building and Conflict Prevention            (CA)

Global Campaign for Peace Education (US)

International association for peace and development in africa (US)

International No to war – No to NATO network (Intl)

Italian Peace and Disarmament Network (IT)

Methodist Federation for Social Action (US)

Movement for Abolition of War (GB)

Pax Christi It (IT)

Peace Action of Wisconsin (US)

Rete Italiana per il Disarmo (IT)

The Disarmament and Security Centre NZ)

The Foundation for Justice and Development Initiatives (FJDI) (UG)

The National Network Opposing the Militarization of Youth – NNOMY (US)

The Peace center in Aarhus   DK

The Peace-movement of Esbjerg (DK)

United for Peace and Justice (US)

Veterans For Peace (US)

Women for Peace and Ecology (GE)

Women’s Action for New Directions (US)

Women’s International League for Peace and Freedom (US)

[1] This figure has been updated with the most recent data available at SIPRI.