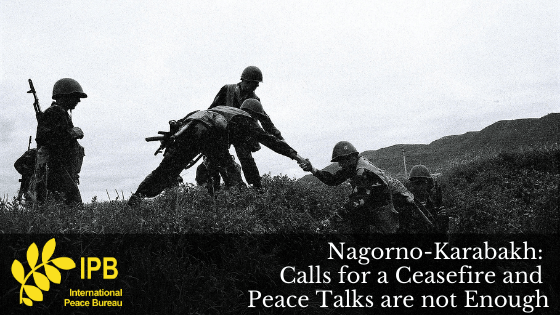 The conflict between Armenia and Azerbaijan has deep and regional roots. With every life lost in the conflict, positions on both sides will harden. This alone is an urgent reason for a ceasefire.

It must be recognized that talks which began with a ceasefire in 1994 have not brought any satisfactory results. Turkey’s rapid public engagement in the conflict, on one side, is troubling. Turkey’s structural and cultural denial in its role in the 1914 Armenian Genocide remains intact. Until that is seriously addressed Turkey cannot hope to be trusted by Armenia. Azerbaijan’s systematic destruction of Armenian cultural artifacts, condemned by UNESCO, is perceived by Armenians as an extension of the 1914 Genocide. However, Armenia must face up to the fact that Azerbaijan citizens remain displaced from their homes in Armenian occupied Azeri provinces, as well as in Nagorno-Karabakh, and have a right to return with dignity.

The international community must also consider their role in the conflict. New weapons which were not produced in either Armenia or Azerbaijan, and not possessed by either side during conflict in the early 90s, are now in their arsenals. According to the Stockholm International Peace Research Institute, Israel provided nearly two-thirds (61%) of all arms imports to Baku over the past year, which have had a significant influence on how the current hostilities are being fought, but they aren’t the only ones. All countries which have manufactured and sold weapons to either country share responsibility, as they cannot say they didn’t know this situation remained unresolved.

Pandemics quicken change. The current outbreak of armed conflict is a reflection of the tension caused by the above mentioned unfinished business left over from the dissolution of the USSR and more. IPB believes that the UN Secretary-General’s call for a global ceasefire during this pandemic should be urgently seized to provide some breathing room for all involved. It is also needed to create space for the international community to reflect on the deep, entrenched, and not easily resolved circumstances of this conflict. The OSCE has shown itself not up to the task (not solely their fault) and should request involvement of the United Nations entities.

Ceasefires generally take a few false starts before they hold, as they are always, initially, broken by the ‘other side’, as has indeed already occurred. This is not a reason for pessimism or giving up. Peace is possible, but neither Armenia nor Azerbaijan have invested the same national financial resources in peaceful resolution as they have for military conflict. Appointment of cabinet level Minister, and budget and support staff, responsible for Dialogue and Deescalation with the other side should be undertaken immediately by both countries to begin what will be a long, long road to resolution.