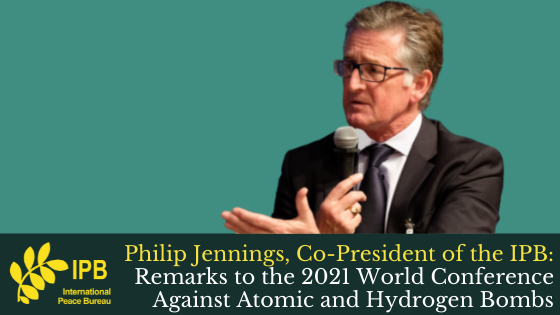 I bring you greetings from the world’s oldest peace organization: the International Peace Bureau.

I bring our respect to the tireless work of the Hibakusha to bring their message of peace to the world. They must be the last people to suffer from nuclear weapons.

My message to you is one of solidarity and hope.

Hope because, with a peace wave of action, we have changed the world, we now have a global treaty that prohibits nuclear weapons.

In this scenario, the Tokyo Olympics have shown how sport can be a force for good. Nevertheless, the existence of Nuclear weapons represents a force for evil placing all human endeavors at risk.

The world is on a wrong and dangerous path. We have reached a tipping point. The doomsday clock is at 100 seconds to midnight. Moreover, Military expenditure surged to 1.9 trillion dollars. 72 billion dollars have been wasted on nuclear weapons each year and spiraling up.

In addition, we are facing new fault lines on old nuclear concerns. Military doctrines are embracing the use of nuclear weapons. As a result, mutual assured destruction is closer and closer.

We have to demolish the case for strategic competition. It means conflict on all fronts over nuclear, military, land, natural resources, economic and political. It weaponizes diplomacy away from peace to confrontation.

The aggressive language from the G7, NATO, and the Wolf Warrior diplomacy from China is a hammer blow to sustainable peace. It threatens war.

We need sustainable peace in Asia as power shifts, rivalries deepen, the new battlefield for strategic competition. From India to Pakistan, the Korean peninsula, China, the USA, and Russia, nuclear expansion is everywhere.

South China sea military maneuvers, territorial disputes are all tempting conflicts whether from an accident, miscalculation, or misreading of events.

At the IPB we are assembling our members in Asia with the message we want a sustainable peace. The Southern Hemisphere is a nuclear-free zone, the peace movement campaigned for this, it already includes much of Asia. Those in power listened to the people and made the giant step.

Our call: the time has come for a nuclear-free zone for all of Asia.

At this moment let me also express our solidarity with the people of Myanmar who are fighting for their democratic freedoms. We condemn the military dictatorship as we condemn all those that crush human rights in this region. The IPB will not be silenced.

Friends it is time to Re-Imagine our world. That is the theme of our IPB Global Peace Congress that convenes in Barcelona in October.

The responses to the global pandemic, climate crisis, militarization, inequality illustrate not just our lack of preparation but misplaced priorities in a world running away from sustainable peace. Therefore, we must Re-Imagine our world. We have an alternative vision with peace at its cornerstone.

We have helped to the launch of a new Global Commission on Common Security. Together with the Global Trade Union Movement and the Olof Palme Centre in Sweden. Why? It’s because 2022 marks the 40th anniversary of the publication of the Olaf Palme report Common Security: A Blueprint for Survival.

The former Swedish Prime Minister assembled a Global Commission which concluded: “There are no victors in a nuclear war, deterrence cannot be made foolproof, and nations must abandon doctrines and preparation for fighting limited nuclear wars as a matter of deliberate policy”.

The Global Commission was clear: “nuclear deterrence cannot provide a long-term basis for peace, stability, and equity in international society. It must be replaced by the concept of common security”,

Furthermore, they said then and I am sure the new Global Commission will repeat: “The conclusion is therefore inevitable that nuclear weapons must be eliminated”.

We will report in 2022. Our aim is to get the world excited once again about the idea of common security, to put it into practice, to emphasize that collective planetary security rests on our common security.

This is the time to Re-Imagine our world. We must push for nuclear de-escalation. To put brakes on proliferation to reinsert an architecture of control over nuclear weapons.

Russia and the USA have recently reaffirmed that a nuclear war cannot be won and must never be fought – they should go one step further and eliminate their nuclear arsenals. They have launched a strategic stability dialogue. However, the way to achieve stability is by removing thousands of weapons from hair trigger readiness.

The Common Security Commission in 1982 shifted thinking and 2022 aims to do likewise. Help us spark a new debate for common security in Asia.

In conclusion, the campaigning that you have done, the tireless efforts of the Hibakusha from Hiroshima and Nagasaki, messages conveyed across the generations have resulted in a global treaty to prohibit nuclear weapons. 54 nations have already ratified the treaty. Global public opinion is with us. The first meeting of states parties will take place in Vienna in January 2022. The world would welcome Japan signing this treaty before then.

Our struggle continues. We will unite with the new generation, with the climate change and labor movements for with no justice, no green planet there can be no peace.

You will be ready for Vienna.

We will be ready for Barcelona.

Moments of hope, solidarity, and ambition.

The time to Re-imagine our world is upon us.

Also listen to Philip Jenning’s closing remarks to our Common Security 2022 webinar “100 Seconds to Midnight” and his appeal to collectively ensure that Hiroshima and Nagasaki remain the last cities targeted with nuclear weapons in our history: